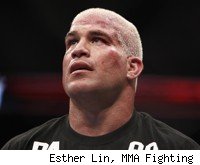 How do Fedor and Tito compare, in terms of the way they'll be remembered by MMA fans?

If the question is simply which one of them was the better fighter, the answer is easy: Fedor. But I think there's more to their legacies than that, and as both Fedor and Ortiz enter the twilights of their careers, I think Ortiz has bolstered his legacy by going out with the biggest and best fights he could, while Fedor has tarnished his legacy by refusing to fight in MMA's marquee promotion.

Ortiz isn't all that good anymore: After losing to Evans on Saturday night, Ortiz is 1-5-1 in his last seven fights. But the historical record will show that even after a new generation of fighters had surpassed Ortiz, he still welcomed the opportunity to test himself against that new generation of fighters. Most of the time he came up short, as he did against Evans, but there was that one time he came out on top, against Ryan Bader at UFC 132, and there was never any question that Ortiz was giving the fans the fights they wanted.

Fedor, on the other hand, has spent the last couple of years avoiding the fights the fans wanted. Fedor was great, but we never got to see his greatness in the UFC. That significantly affects his legacy, even if you think he's the best MMA fighter ever.

In saying that, there's a danger of taking it too far, and recently there's been some revisionist history about Emelianenko's competition since he started fighting exclusively in the United States in 2008. It's not correct to say that Emelianenko signed with Affliction because he was ducking the top heavyweights in the UFC. At the time Fedor signed with Affliction, its heavyweight division was comparable to the UFC's heavyweight division. The three opponents Fedor signed on to fight in Affliction -- Tim Sylvia, Andrei Arlovski and Josh Barnett -- were all considered Top 5 heavyweights at the time.

During Fedor's current three-fight losing streak, he's been compared to other great athletes who kept going past their primes, like Jerry Rice and Michael Jordan and Willie Mays. But there's a fundamental difference between what Fedor has done over the last couple of years and what Jerry Rice did on the Denver Broncos, or Michael Jordan did on the Washington Wizards, or Willie Mays did on the New York Mets: Rice, Jordan and Mays all kept going past their primes because they desperately wanted to compete at the highest level. Emelianenko, however, chose to avoid competing at the highest level.

Ortiz is more like Rice, Jordan and Mays, past his prime but still putting himself out there against the best. Ortiz was soundly beaten by Evans on Saturday night, but the mere fact that he took the fight should bolster his legacy.

UFC 133 notes
-- When it comes to pure, pound-for-pound punching power, is there anyone better than Vitor Belfort? Since moving down to middleweight three years ago, Belfort is 4-1, with all four wins coming by way of brutal knockout punches. (Of course, the loss was also a brutal knockout, courtesy of Anderson Silva.)

-- On the first fight of the Facebook stream, the UFC's TV production people did a really nice job of zooming in on Paul Bradley's legs to show the effects of Rafael Natal's leg kicks: Bradley's legs were red and swollen, and we got a great look at it.

-- There were several low blows during the preliminary fights, and every time a fighter took a kick to the groin, Joe Rogan mentioned Diamond MMA, which according to Rogan makes a better kind of cup to protect fighters' junk. I hope Diamond MMA ships Rogan a lifetime supply of cups for all publicity he gave them.

UFC 133 quotes
-- "I could have shown more things, but I'll just fight again soon, keep putting on great shows and I'm going to keep evolving."--Rory MacDonald after his first-round TKO victory over Mike Pyle. One of the really impressive things about MacDonald, a great-looking 22-year-old, is that he doesn't seem satisfied with his own performances to date. He wants to keep getting better, which has to be frightening for the rest of the welterweight division.

-- "It wasn't my best performance. I'm happy I got the win, but the fight wasn't that good." -- Constantinos Philippou, not exactly celebrating his first UFC win.

Good call
We usually only point out judges when they make bad calls, so let's note that the one judge who gave Mike Brown a 10-8 first round over Nam Phan made a very good call. That was a dominant round for Brown, and it definitely deserved to be a 10-8 round.

Bad call
What in the world was Dennis Hallman thinking when he decided to wear Speedo-style shorts into the Octagon? Let's hope we never see another fighter dressed like that again.
Stock up
-- Brian Ebersole has more than 60 pro fights on his record, and his stock has never been higher than it is right now, following his first-round TKO victory over Dennis Hallman. UFC President Dana White gave Ebersole a $70,000 bonus for beating Hallman, which White called "A thanks for getting those horrifying shorts off TV as soon as possible bonus." It took Ebersole more than a decade to get to the UFC, and now he's 2-0 inside the Octagon.

-- Brown's stock is up after he got back in the win column with a unanimous decision victory over Nam Phan, halting a two-fight losing streak. Still, he has a nasty habit of starting off like gangbusters and then slowing down as the fight goes on: After dominating the first round, he easily could have lost both the second and the third. Brown has a good reputation for having a good work ethic, but it appears that he needs to shake up his training, because he runs out of steam too often.

Stock down
Matt Hamill has now lost two fights in a row, and although there's no shame in losing to either Alexander Gustafsson or Rampage Jackson, what's worrisome for Hamill is that he's been unable to take advantage of what used to be his biggest strength: His wrestling. Hamill was never able to take Jackson down in his unanimous decision loss at UFC 130, and he was unsuccessful on all three of his takedown attempts against Gustafsson on Saturday night.

Fight I want to see next
Rashad Evans vs. Jon Jones or Rampage Jackson. Evans is long overdue for another crack at the light heavyweight belt, and he should finally get that shot against next month's Jones-Jackson winner. Whether it's Evans vs. Jones or Evans vs. Jackson, that's going to be a great fight.