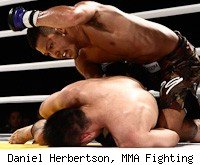 Pancrase put on one of the biggest cards of the year on Sunday night - a mammoth 20- fight card that included the 2011 Lightweight GP semifinals, a Pancrase bantamweight championship qualifier, the Pancrase Flyweight Championship semifinals and the finals of the "Neo Blood" rookie tournament in five weight divisions.

Kazuki Tokudome and Isao Kobayashi booked a meeting in December after besting their respective opponents in the Lightweight GP, Shintaro Ishiwatari devastated Motonobu Tezuka to get a date with bantamweight ace Manabu Inoue, Mitsuhisa Sunabe and Hiroyuki Abe got their tickets to the first Pancrase 120-pound championship fight and US Navy serviceman Jon Shores capped off an impressive year with a first round submission to claim the Featherweight Neo Blood Rookie Tournament and Neo Blood MVP award. 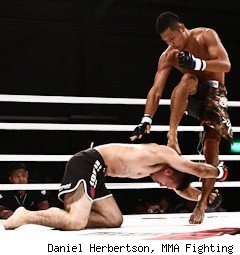 Paraestra Hachioji's Kazuki Tokudome (pictured right) soccer kicked, stomped and pounded his way to a one-sided victory over a patient Kota Okazawa to advance to the final of the 2011 Pancrase Lightweight GP.

Okazawa was outclassed in the striking and power department and so chose to bide his time until a submission attempt presented itself – coming close to a kimura in the first round and an armbar in the second. Okazawa's rather passive approach to the fight though cost him as the damage had become too much by the final round. A painful stomp to the throat to close the second round set the tone from the remainder of the fight as Tokudome threw a constant volley of attacks, earning him a 10-8 final round to take the fight with 30-26 on all three judge's cards.

In a frustrating bout marred by injury, Isao Kobayashi out-struck and out-grappled Tomoyoshi Iwamiya to move to the finals of the 2011 Pancrase Lightweight GP. The fight was even early, with both men getting dropped by punches in the first round but a knee injury sustained by Iwamiya midway through the fight had his corner clutching the towel, ready to throw it in at any moment.

The towel never came though as Kobayashi took the bout to the ground where Iwamiya was able to muster the strength to defend, but the seriousness of the injury became apparent with the final bell as Iwamiya hobbled to his corner, his knee swollen and purple. With his foe in no condition to fight for a significant portion of the fight, Kobayashi easily took the unanimous decision.

With tonight's results, Kazuki Tokudome and Isao Kobayashi will meet in the finals of the Lightweight GP on December 3rd. 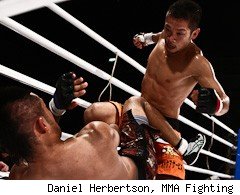 Fifth-ranked Tezuka clearly took round one, coming close with a head scissors and controlling the pace of the bout, but as the fight progressed, third-ranked Ishiwatari's aggression and power kicked into gear and he was able to use his hands to shift the flow of the fight in his favor. Tezuka never ceased his ground attacks though and the bout was truly up for grabs as the final bell rang. Two judges awarded Ishiwatari the win while one scored a draw with the "must" decision going to Tezuka. 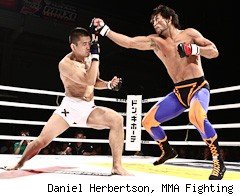 Only hours after Dennis Hallman sports one of the worst excuses for fight attire in MMA history, Grabaka showman Kei Yamamiya (pictured right) responds with one of the best ever – a full Tigermask pro-wrestling costume with tights and knee-high boots and mask and cape for the entrance.

Yamamiya's southpaw left hand and knees from the clinch proved far too good for Ichiro Kanai as Yamamiya scored time and time again to the face and body. One conservative judge managed to justify scoring the bout a draw but the other two

Pancrase Flyweight Championship Tournament Semi Finals
Former Super Flyweight champion Mitsuhisa Sunabe knew what he had to do to get past the 5-foot tall Yoshihiro "Child" Matsunaga – he had to use his 7.5-inch height advantage.

Matsunaga had a winning gameplan in round one, staying close in the standup and getting takedowns in to side control to negate the reach difference but in the second round, Sunabe's taunting served its purpose by suckering Matsunaga into the striking game.

The two fighters, competing for a shot at the first Pancrase flyweight strap, stood and traded for the remainder of the bout and unsurprisingly, Sunabe's height advantage allowed him to score better with knees and punches to get the decision and advance him to the flightweight tournament final.

Former Shooto title contender Hiroyuki Abe's (pictured below) relentless armbar attempts paid off as he was awarded with a first round submission win over Sengoku veteran Takuya Eizumi in the semifinals of the tournament to decide the first Pancrase flyweight champ. After getting the early takedown, Abe attempted four armbars from mount, easily recovering his position after each failed attempt, before getting the tap that saw him move to the tournament final. 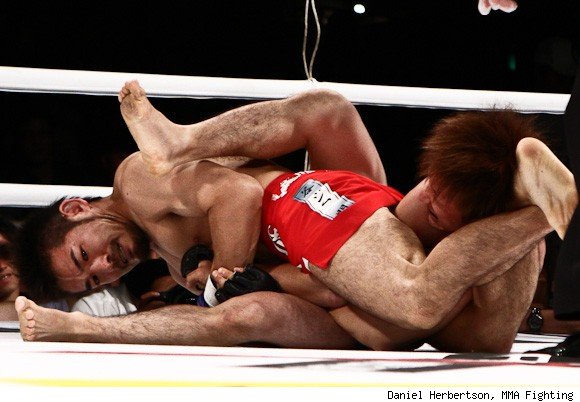 Team Tackler's Shinsho "Animal" Anzai did manage to TKO the man formally known as "Kinniku Mantaro, The 59th Prince of Planet Muscle", 7-time All-Japan Wrestling Champion Akihito Tanaka, but the Pancrase ring was no help. Anzai landed a crush overhand early in the bout, sending Tanaka tumbling out of the ring and onto the entrance ramp where Anzai rained in potentially fight-finishing hammer fists. Because the bout was now outside of the ropes however, the fight was restarted and Tanaka was able to recover enough to come close with a slick omo-plata and rear naked choke. Anzai escaped the submissions after a significant struggle though and get the win that evaded him earlier with heavy hands stopping a turtled up Tanaka.

Sixth-ranked super flyweight Seiji Ozuka scored the upset TKO victory over first-ranked Isao Hirose with a devastating overhand right early in round two. Ozuka and Hirose both landed a significant amount a power shots in round one but the right hand proved the winning blow against the southpaw, sending Hirose to the canvas where he was pounded out for the somewhat early referee stoppage. Post fight Ozuka made an enthusiastic request for a fight with reigning super fly champ Kiyotaka Shimizu.

In a battle of Sengoku veterans, Tatsuya So's relentless takedowns and control should have been enough to get past Shoko Sato but his lack of significant striking resulted in two of the judges scoring a draw after two rounds. So was content with pushing his opponent in the corner and maintaining position rather than making any effort to stirke and so Sato's efforts to escape and reverse were enough to draw the bout.

Paraestra Hachioji's Yoshiaki "Bancho" Takahashi's cocky striking and taunts led him to victory over 2009 Shooto Rookie champion Koshi Matsumoto after two close rounds. Matsumoto's grappling levelled the first stanza but Takahashi made his mark in the second, dropping Matsumoto with punches to give him the edge needed to get the judges approval.


Pancrase "Neo Blood" Rookie Tournament Finals
Team Tackler's Shigeaki "Kusa MAX" Kusayanagi's calculated torrent of punches, knees and kicks to the body devastated Tomotsu Kitada in the final of the Welterweight Neo Blood Tournament, culminating in a second round kick to the liver that floored Kitada, followed by punches on the mat to bring in the referee. Kusayanagi's defensive wrestling and power strikes, in particular his kness from the clinch, were far too much for an overmatched Kitada.

Paraestra Chiba's Keiji Sakuta impressive tomoe nage throw into mount in the final seconds of his bout with Paraestra Hachioji's Takatoshi Matsumoto gave him the edge he needed to win the judges favor in the final of the Lightweight Neo Blood Tournament. With both men scoring on the feet, the bout was up for grabs going into the final moment but the throw, which resulted in a very close rear naked choke, turned the bout in Sakuta's favor with two judges scoring a draw with the "must" vote for Sakuta and the final judge scoring it 20-19 for the unanimous decision.

US Navy serviceman Jon Shores capped off an impressive run in the Featherweight Neo Blood Tournament, finishing Yoji Saito with a rear naked choke late in round one. Saito took the fight to the American early, securing the takedown in the opening seconds. Shores was aggressive off his back however and after missing with inverted armbar attempts from guard, swept into mount and then secured the fight-finishing rear naked choke as Saito gave up his back.

Shores, who serves at the US Navy base in Yokosuka, was the only Neo Blood winner to finish all three opponents and his performance earned him the tournament 2011 Neo Blood MVP award.

Yuta Numakura's path to victory in the 2011 Bantamweight Neo Blood tournament was a tough fought one, taking two split decisions and then winning a very close "must" decision over Kenichi Tosa in the tournament final. After to competitive rounds mostly fought in the clinch, two judges scored the bout a draw but the "must decide" rules for scoring meant they needed to announce a winner. Both agreed that a last minute takedown and ground and pound effort from Numakura was enough to take the unanimous decision.

In the Neo Blood Super Flyweight GP final, Tokyo Yellowman's Yuki Yasunaga narrowly wrestled his way to a decision victory over Masakazu Utsugi. Yasunaka nullified Utsugi's distinct speed advantage on the feet with well timed shots to turn the bout in his favor after a rocky start. 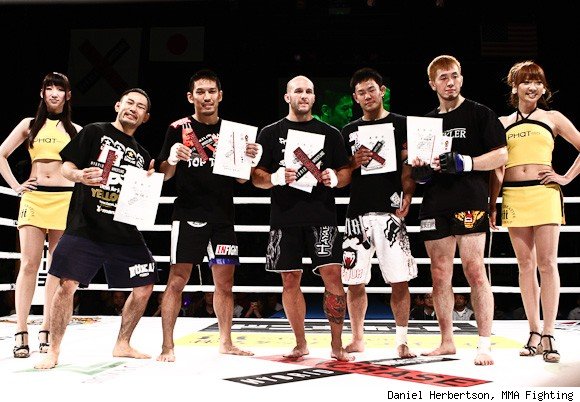