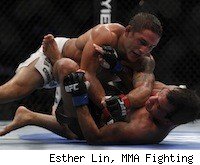 PHILADELPHIA -- For the 11th time, Chad Mendes stepped into the cage, and for the 11th time he won. But not everything is perfect for the fighter nicknamed "Money."

While his unbeaten record may make him seem like a natural to be next in line for a featherweight title shot, a hand injury suffered in his unanimous decision win over Rani Yahya may rule him out of that slot.

Mendes said he hurt his hand in the first round of the UFC 133 bout, and told MMA Fighting afterward that he wasn't sure of the extent of the injury, but that he "felt a pop" and couldn't make a fist afterward.

Afterward, when asked by MMA Fighting if Mendes would get a title shot, UFC president Dana White said he thinks Mendes broke his hand and would soon be getting X-rays.

White seemed to indicate that Mendes may get the title opportunity if he was healthy. Though the unanimous decision performance didn't blow away onlookers, it was a solid performance nonetheless. White tempered any criticism of Mendes, who has won five of his six fights under the Zuffa banner by decision, including four straight.

"It's tough when you're in that position when people say he should be next but you don't go in and finish," he said. "It's tough, but there's no doubt he won the fight. If Tiger Woods goes out and wins but doesn't crush everyone, people ask, 'Is he the best in the world?' But he still won."

Mendes said that it was his plan to spend much of the fight on his feet, but after he injured his hand he was forced to change things up. He went a perfect six-for-six in takedown tries and stayed out of any trouble against the submission specialist in picking up the win.

For his part, Mendes was satisfied with his victory.

"Of course we all look for a finish, but overall I am happy with the fight and I felt good," he said. "When I took him down the first time I wanted to see what he felt like. He's a tough guy and I knew he would be strong. I was trying to elbow him and follow through with some quick pop-shots as much as possible."

Unless he leaves the doctor with a clean bill of health though, he might miss out on another title shot (he already skipped one chance when he decided not to wait for Jose Aldo to get healthy). If he does get positive news from his doctors, he may be the man waiting to see who emerges with the belt when Aldo and Kenny Florian scrap at October's UFC 136.