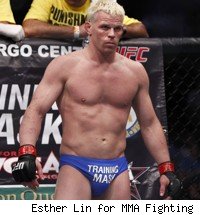 Brian Ebersole benefited from his UFC 133 opponent Dennis Hallman's outrageous shorts, earning a $70,000 post-fight bonus for, as UFC president Dana White referred to it, "getting those horrifying shorts off TV as soon as possible."

There's been multiple winners in the past for post-fight bonuses, but never a special category. As the saying goes, extreme situations call for extreme measures.
The usually reserved Hallman took the spotlight from Ebersole's trademark up arrow chest hair by wearing blue manties to the fight, and even stretched out in the middle of the cage during his entrance, adding to the discomfort. Commentator Joe Rogan described the shorts as, "What an unfortunate choice of shorts" and White during the fight tweeted, "WTF!!!! Fighting in that will be illegal after tonight! Anyone want to grapple with Hallman?"

Afterward, White was still angry at the situation, saying after the post-fight press conference that he was "horrified" by Hallman's choice of trunks.

Although Ebersole had difficulty in the grappling department early on, he would escape from a guillotine to win by ground and pound punches and elbows against longtime fighter Hallman, who holds two submission wins over UFC Hall of Famer Matt Hughes.

In the usual categories for Saturday's UFC in Philadelphia, Rashad Evans and Tito Ortizwon for Fight of the Night and Vitor Belfort won for Knockout of the Night. Each post-fight bonus was worth $70,000 and no submission bonus was awarded since there were no submissions on the 11-fight lineup.