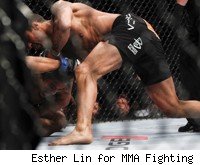 Vitor Belfort hits as hard as anyone in the middleweight division in mixed martial arts, and he showed that once again on Saturday night.

In the co-main event at UFC 133, Belfort made short work of Yoshihiro Akiyama, connecting with a left hand that knocked Akiyama down and several more punches on the ground, then letting Akiyama up for just an instant before finishing him off with a few more hard punches that left him out cold on the canvas.
More: UFC 133 Results | Vitor Belfort vs. Yoshihiro Akiyama Live Blog
The official time of the first-round knockout victory was 1 minute, 52 seconds. It was a great bounce-back victory for Belfort, who was returning to the Octagon for the first time since getting knocked out himself by middleweight champion Anderson Silva.

The victory improved Belfort's professional MMA record to 20-9, including 14 wins by knockout or TKO. Akiyama falls to 13-4, and he's now on a three-fight losing streak.