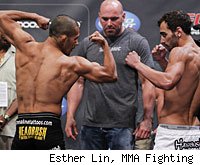 PHILADELPHIA -- This is the UFC 133 live blog for all the non-televised preliminary bouts in support of tonight's UFC pay-per-view from the Wells Fargo Center.

The four fights, which will be streamed on Facebook, are Ivan Menjivar vs. Nick Pace, Johny Hendricks vs. Mike Pierce, Mike Brown vs. Nam Phan and Rafael Natal vs. Paul Bradley.

Round 1: The two clinch right out of the gate. Pace working to tie him up but Menjivar works free. Pace tries a hiptoss but Menjivar muscles his way free. Low blow timeout. Pace takes Menjivar down with two minutes to go. Menjivar with elbows from the bottom. Pace passes and takes Menjivar's back. Menjivar gets to his feet with Pace draped on him. Pace has the body triangle now and tries to sink in the choke. Menjivar keeps his chin tucked though and breaks free. Menjivar fires some offense as the round runs low. Pace takes the first, 10-9.

Round 2: Menjivar stalking early, landing a thudding kick to the body. Now attacking the legs with low kicks. Menjivar doing a nice jab faking with his hands and throwing his feet. Pace perhaps waiting for an opening for the takedown. Menjivar really beginning to take over now, showing off his striking arsenal. Pace is working his way around the perimeter of the cage with his back to it. Now Menjivar gets the clinch and lands knees. The round was getting one-sided but suddenly Pace shoots and takes Menjivar down. One minute to go. Pace in Menjivar's half-guard. A few short punches but nothing of big substance. It's too little, too late as Menjivar takes it 10-9.

Round 3: All standup to start the round. Menjivar is beginning to headhunt now. Big right hand from him. Menjivar mixing up the low kicks and high strikes. Pace is hanging back and waiting. A Menjivar low blow causes another timeout. Pace begins to come forward now but Menjivar is faster and more accurate. Huge knee from Pace with 60 seconds left. It hit Menjivar in the eye and he quickly backs up. His eye is shut. Pace is stalking him around now. Pace turning it on. Will it be enough? In my opinion Menjivar won the first four minutes, Pace won the last one, so Menjivar gets it 10-9.

Round 1: Hendricks gets the clinch and scores some early knees. The two trade kicks as a slow pace takes shape. Hendricks clinches against the fence and throws knees to Pierce's legs. Pierce breaks free and they restart. Hendricks with some nice clinch work including a knee to the face and elbow to the head. But this one is slow. Pierce fires off a head kick but Hendricks backs away. Hendricks tries a knee that misses as the round end. It's Hendricks, 10-9.

Round 2: Pierce comes out aggressively with a combo into a headkick the last of which misses. Hendricks shoots in and Pierce is ready for it and sprawls. Pierce moves him against the fence. The pace picks up midway through as the pair exchange. Pierce lands the most solid shot, a left hook. Hendricks shakes his head, but it landed. Pierce does some nice work in the clinch but Hendricks fires back. A head kick is partially blocked by Pierce. Hendricks rushes in for a takedown. He doesn't get it. A super close round but I'll score it for Pierce 10-9.

Round 3: Pierce lands a left a split-second after they touch gloves. Hendricks looks offended and comes forward with a combo. Pierce answers, coming forward and lands a sharp right. Hendricks shoots. PIerce defends but keeps a front face lock, kneeing Hendricks in the shoulders and body. Hendricks breaks away with three minutes left. Pierce tries a takedown. Hendricks feeds him a right hook but Pierce stays on him, slamming him to the ground. Plenty of time still to work. Hendricks works to neutralize from his back. Pierce lands an occasional elbow but not much else. Hendricks upkicks and PIerce is still grounded, causing a timeout. They restart standing, and come out swinging. Hendricks tries a takedown, Pierce keeps his base as the round goes. It's Pierce, 10-9.

Round 1: Brown rushes Phan early but Phan sprawls free. Brown shoots again and pulls Phan to the ground, quickly taking his back. He unloads with a few left hands to the head as Phan tries to cover up. Brown threads more shots under Phan's armpit and to his head. Phan is pinned against the fence and looking stuck as Brown has one of his leg's figure-foured. Brown's left hand is going to be imprinted on Phan's face after this round. With his right hand, Brown is holding Phan's right hand, so he only has one hand to defend. Brown keeps hammering with the left, but it's not his power hand so he's not able to rock him. Still, it's very one-sided. Now he opens with elbows from the top. Phan finally gets to his feet with 20 seconds left as the crowd pops. A very one-sided round bordering on 10-8 but I'll score it 10-9 since he never looked too close to finishing.

Round 2: Phan looks relatively fresh after the round and comes right to the middle of the cage. Brown shoots and Phan stuffs him. Brown stays with it but Phan wards him off. Phan lands a hard left as he tries to open up his offense, but Brown shoots again. Brown seems determined to make this a grind. Midway through the round he backs Phan against the fence, digging low and taking him down. Phan pops up 20 seconds later. Brown lands an overhand right and Phan answers with a left hook. One minute left. Phan with another left and a combo as he tries to steal the round. Phan stops another takedown as we near the final seconds. This was a much closer round, Phan 10-9.

Round 3: Phan right hand staggers Brown early. He pours it on quickly. Brown holds his ground, then fires a wild right that just misses. Brown takes him down. Phan pops back to his feet but Brown keeps his waistlock and grinds him against the cage. Brown left hook is partially blocked. Both me showing a bit of fatigue as Brown shoots and Phan stuff him and adds an elbow to the head. Still anyone's round with 90 seconds left. Brown rushes in and puts Phan against the fence. He's trying for the takedown. Phan resists. Brown still pushing for the takedown as the round ends. It's another close round but Brown takes it for controlling the pace, 10-9.

The two-time All-American wrestler and former TUF 7 contestant Bradley is first to enter, walking out to "All of the Lights" by KanYe West. The BJJ black belt Natal holds a five-inch reach advantage.

Round 1: They feel each other out and Bradley is appearing to rely on an overhand right. Meanwhile, Natal is taking it slow and taking advantage of his reach advantage with jabs and the occasional leg kick. Natal opens up some blood on the nose of Bradley. Bradley reaches for the first takedown at 2:02, but Natal shrugs it off. Bradley wings a big combo to set up another takedown but still misses. Bradley rushes in and is now 0-3 on takedowns. Natal has left Bradley's lead legs pink from leg kicks. Bradley connects with a right late in the round as a counter to a leg kick. 10-9 Natal.

Round 2: Bradley lands a right and then slugs, stunning Natal off-balance. Bradley scores the takedown and works for strikes inside the halfguard of Natal. Natal teases a leglock and Bradley backs off to bring the fight back to standing. Natal connects on another kick. Bradley shrugs off a takedown attempt. Natal is landing on Bradley at will with leg kicks and we'll have to see how much of a toll it will take on Bradley as the fight progresses. Bradley gets poked in the eye by mistake and tells the referee he's "good." With 30 seconds left, Bradley scores a double-leg takedown to close the round. 10-9 Bradley.

Round 3: Bradley hurts Natal early but Natal recovers quickly this time. Bradley tries for a takedown and Natal backs him off with a knee. Natal tries for a spinning backfist and almost gives up a takedown. Natal defends a single-leg. Bradley gets close with double-leg, but excellent takedown defense by Natal. Natal lands a nice elbow. Natal defends another takedown. Bradley has no answer for Natal's leg kicks. Bradley takes down Natal with a little over a minute left but Natal escapes soon after. Natal's head kick is blocked. Natal scores with a knee to the body during a tie-up. 10-9 Natal.

MMAFighting.com scores the fight in favor of Natal 29-28.