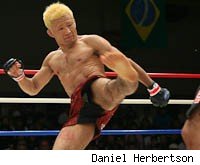 Rookie champions Issei Tamura and Yosuke "Flying Monkey No.2" Saruta made quick work of their opponents, finishing their bouts in a combined two minutes and twenty-three seconds while former bantamweight world champion Shinichi "BJ" Kojima returned from injury that sidelined him for two years to pick apart Masaaki Sugawara in an entertaining three-round war.

2008 Shooto lightweight rookie champion and MVP Issei Tamura made short work of Sengoku veteran Katsuya Toida, dispatching of the grappler with ground and pound early in the first round. Tamura worked Taida to the ground early with a hard fought takedown and then from back side control, rained in punches until Toida went limp, prompting the referee stoppage.

Former Shooto bantamweight champ Shinichi "BJ" Kojima returned from a two-year absence to narrowly get past perennial contender Masaaki Sugawara with a split decision after a gruelling three-round war.

The injury-plagued Kojima battered Sugawara with inside lowkicks and southpaw jabs while Sugawara was less calculated in his attacks, throwing every strike at his disposal. The significant damage caused by Kojima's lowkicks and some successful takedowns were enough to win the two judges favor and give the former champion a happy welcoming back to Shooto.

2009 Shooto bantamweight rookie tournament champ Yosuke "Flying Monkey No.2" Saruta made short work of Rumina Sato pupil Nobu Watanbe, taking down his opponent into back control only seconds into the bout. The inevitable rear-naked choke took exactly one minute.

Michinori Tanaka survived a rocky start to dispatch of Aomori's Takuya Ogura with a first-round triangle choke. Ogura backed up his opponent early with punches, forcing Tanaka to turn his back after retreating to the corner. Seizing the opportunity, Ogura leapt to back control and seemed close to finishing the bout with a rear naked choke. Tanaka was good enough however to escape and after an impressive slam, locked in his own choke – a triangle that finished the fight midway through the opening round.

K'z Factory's Takeshi Saito devastated Yusataka Ishigami with a second round slam KO while locked in a triangle choke. Saito's single leg takedown gave him a handy lead in the first round but after again getting the takedown in the opening moments of the second stanza, Ishigami was good enough to lock in the triangle choke. Noticing that his opponent had failed to control his posture or hook his leg, Saito hoisted Ishigami up and drove the back of his head into the canvas for a knockout victory.

Kensuke Nakamura's southpaw right hook came close to finishing his opponent, Yoshinori Suzuki, midway through the first round but his insistence to bring the bout to the canvas made things more difficult for the judges than it needed to be. Suzuki's submission attempts and defense was enough to level the score cards on at least one judge's scorecard but the other two gave Nakamura the nod.

Paraestra Hiroshima's Tatsuro Kamei proved to be too much for the 41-year-old Keiji Koizumi. Kamei exploited Koizumi's noticeable dislike of being punched , pounding his way to an easy decision victory.

Kenichiro Marui's sweeps and guard passes led him to victory over Keita Ishibashi after two rounds. Marui bounced back from an early groin shot to control the bout and maintain the top position on the canvas. Ambitious kimura attempts from Ishibashi were not enough to sway any of the three judges.

In the evening's opener Yamato took a questionable majority decision over AACC's Takahito Tomozawa. Despite Tomozawa avoiding the winging punches of Yamato, and scoring numerous takedowns through the two-round bout, two judges saw fit to give the fight to the striker.