Seven Ways of Looking at UFC 133 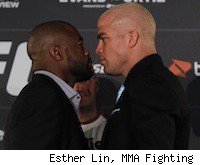 UFC 133 descends on Philadelphia this Saturday night and there are plenty of questions, concerns, and semi-insightful observations to sort through while we wait. Won't you join me?

I. At least for now, accepting the fight with Rashad Evans looks like the smartest move Tito Ortiz has made in a long time. Not only does it get him back in the good graces with the UFC, which is paying him a truckload of money every time he steps in the cage, it's also turned him into something resembling a fan favorite for the first time in years. Not that there won't still be some boos for the HBBB -- that's half the fun of any Ortiz fight -- but stepping up and squaring off against an opponent who many fans dislike even more, though for less clear reasons, is a great way to win some support. Now you just have to wonder if jumping in against a grinder like Evans will still feel like such a good idea eleven minutes into the actual fight.

II. When Mike Pyle made his professional debut against Quinton "Rampage" Jackson in 1999 (read all about that fateful night here), his UFC 133 opponent, Rory MacDonald, was just ten years old. If Pyle doesn't at least try to intimidate the kid by pointing out that he was going toe to toe with "Rampage" back when MacDonald was still trying to master long division, it'll be a golden opportunity wasted.

III. Show of hands: how many of you even knew that Matt Hamill was on this card before you looked it up on the internet? If your hand is up right now, I have two things to tell you: 1) I suspect you might be lying, and 2) put your hand down; people are staring. How does Hamill go from a decision loss in what was (at least according to the posters) a main event bout at UFC 130 to a Spike TV prelim bout that gets almost no traction at all? I'm not sure how to answer that, but I suspect it might be the UFC's way of admitting that Jackson-Hamill really wasn't much of a main event to begin with. Now Hamill really can't afford to lose to Gustafsson. At this rate of decline, he'd end up in some fight that the UFC decides to just describe on Twitter rather than film.

IV. When Rashad Evans defeated "Rampage" Jackson at UFC 114, Jackson had been out of action for a little over 14 months. The bout with Ortiz will be Evans' first since then, and by the time they step in the cage he will also have been off for just a little over 14 months. That time off took an obvious toll on Jackson. Then again, he was away filming a movie, and he's never been quite the workhorse in the gym that Evans is, anyway. But can Evans really jump back in the cage after more than a year away and pick up right where he left off, especially against an opponent who fought a little over a month ago? Maybe, but ring rust is like locking your keys in your car: it's an obvious mistake that you can see others making, but somehow that doesn't help once it's your turn.

V. Yoshihiro Akiyama has yet to fight on a UFC card where he didn't pocket a Fight of the Night bonus, even if he lost more of those fights than he won. Vitor Belfort, on the other hand, has won one Knockout of the Night bonus and been on the business end of another. Seems like they both have their own streak to maintain, in a way. Any chance they find a way to keep both of them going? Hey, you've got to keep setting new goals. That's what people tell me, anyway.

VI. Jorge Rivera should win, but he really can't afford to lose. At 39 years old and facing an opponent with almost zero name recognition (only in part because it's as hard to spell as it is to pronounce), this is one of those fights that doesn't benefit Rivera a ton with a victory, but would really sting him with a loss. On paper, this is his fight. He's got far more quality experience, and he's proved he can win in the UFC, which Constantinos Philippou hasn't. That would seem to add up to a Rivera win, which ought to worry him just a little. Sometimes it's fights like these that wind up being the toughest ones.

VII. Dennis Hallman and Brian Ebersole are a couple of absolute workaholics. That much is obvious just from their records. They have 168 fights between them and 26 combined years of MMA experience. In other words, these guys have forgotten more about fighting than most people will ever know. In fact, that's part of what makes their fight so hard to predict. Not only do they seem to be pretty evenly matched skill-wise, but neither of them holds a significant advantage in experience, which must be a major change for each of them. And, oh, what's that you say? You want to read about Hallman's first fight, too? Okay, have at it.