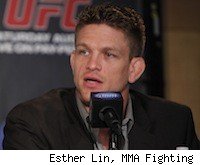 PHILADELPHIA -- Despite his advanced age by the standards of professional sports, 35-year-old Mike Pyle is nowhere ready to call it a career. In fact, he feels that he's just hit his stride as a fighter. Pyle has always had a reputation as a monster in the gym, yet he's sometimes struggled to find consistency in the cage.

Now in the midst of a three-fight win streak, Pyle (21-7-1) faces one of the top prospects in the entire sport. Rory MacDonald is 22 years old, young and strong. From the time he signed with the UFC, big things have been expected of him, and so far, he's mostly delivered.

Each of MacDonald's three UFC fights have come against veterans. He beat Mike Guymon and Nate Diaz, and looked great in the first two rounds of his fight against Carlos Condit before fading and losing in the third. His fight against Pyle becomes something of a test to see if he's learned his lessons. But Pyle says he's not about to be a test or a stepping stone for the young upstart.

"What he thinks doesn't matter to me," he said. "When we get in there and we start finding that rhythm of the fight, he'll find he won't be able to handle my rhythm."

The 6-foot-1 Pyle has had a career that's spanned over a dozen years. It's seen its share of ups and downs, yet he's never quite risen to the levels some equated with his skillset. While he holds career wins over Jon Fitch, John Hathaway and Ricardo Almeida, he'll also probably be the first to admit he lost fights he shouldn't have.

Pyle, though, insists that he is simply a late bloomer. In fact, UFC president Dana White said that Pyle recently told him that this is his time, and his window to reach the top. Asked why it took him so long to reach his peak, Pyle kind of shrugs his shoulders. Maybe it all just came together late, he suggests.

Pyle is wise enough to the game that he understands the potential held by MacDonald. Many consider MacDonald part of MMA's next wave of talent that trained in all disciplines from the get-go, making him comfortable in every facet of the fight game.

Even Pyle admits that he's flashed some strong skills so far.

"He's definitely an impressive fighter, no doubt about that," he said. "I'm in the UFC, he's in the UFC. We're fighting in the UFC Saturday night. We're both going to be tough. There's no slackers in the UFC. You're always tested when you fight in the UFC whether you're it's your first fight or 10th fight. You're always going to be tested and I'm looking forward to the test. I'm really anxious about it. It's a great matchup. He's got skills, I've got skills. Let's put it together and let's make a show."

Despite his overwhelming experience, Pyle is a massive underdog in the fight, with MacDonald around a 3-to-1 favorite. That's no surprise for Pyle, who has been an underdog in most of his recent bouts. In each of his last three -- against Jesse Lennox, Hathaway and Almeida -- he was expected to lose, only to come out victorious. Pyle has been around long enough to know you don't fight numbers, you fight men. So with names like Quinton "Rampage" Jackson, Jake Shields and Fitch on his resume, he doesn't find himself with any anxiety before fight night.

"The last three fights I've had, I've been the underdog every time," he said. "Those odds mean nothing to me. Whoever is making those odds, it doesn't affect me at all."