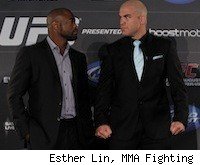 Last time on Fighter vs. Writer, Jorge Rivera just barely beat me by calling the Hendo-Fedor fight perfectly. I hate losing, but I have to admit that Rivera handled his victory with real class on Twitter, so I can't stay mad at the guy. Just goes to show that it's always best to act like you've been there before.

This time around, Jared Hamman takes a break from training for his fight with C.B. Dollaway next weekend to match brains with me. As I would learn, Hamman goes about the process of making many of his picks in a different way than most people. Is it just recklessness, or does he know something we don't?

Hamman: Ortiz via decision. "I'm not a fan of either of those guys, honestly. They're two knuckleheads who are fighting each other. I really don't care that much, but I'm going to go towards Tito because, to me, he's an old legend."
Fowlkes: Evans via decision. I must respectfully disagree on the knucklehead assessment. Evans is actually a really likable guy once you talk to him, and it continues to surprise me that people dislike him so much. Plus, I think he has so many ways to win this fight. He just can't make many mistakes.

Hamman: Belfort via TKO. "That's going to be a sick fight. I think it's a Fight of the Night contender. Vitor's a man of God, so I have to go with him. I just like the way he is, his integrity, and his fighting style. I think he catches him with his striking like he did to Rich Franklin."
Fowlkes: Akiyama via decision. I feel a little bit insane as I make this pick, but I don't know, something tells me Akiyama's going to survive a rough first round and then just barely edge out Belfort in the last two. Either that or he'll get knocked out in the opening minutes of the fight.

Hamman: Ebersole via friendship with Hamman's training partner. "I don't know too much about either of those guys, but Jesse Taylor, my buddy who I'm training with out here at Team Quest, says Brian Ebersole is his buddy, so I'm going to go with him."
Fowlkes: Ebersole via decision. There are probably more scientific ways to arrive at this conclusion than the way Jared did it, but I agree. Hallman is tough character, but I think Ebersole's size and range will make all the difference.

Hamman: Rivera via management team. "I have to go with Jorge because we have the same management. I don't know too much about the other guy, but Jorge and I, we're both managed by MC Hammer, so there you go."
Fowlkes: Rivera via TKO. I'm not sure how much of a factor Hammer's going to play in this one, but I do think that Rivera is the better all-around fighter. As long as he doesn't let Philippou turn it into a boxing match, he should take this.

Hamman: MacDonald via decision. "I like Rory MacDonald. I like that young kid. I know Mike Pyle is tough and has won some significant fights, but Rory MacDonald is rising up, and the way he tossed Nate Diaz around was impressive. He's meeting the potential that people hoped he would, I hope he continues to do that."
Fowlkes: Pyle via decision. I'm going out on a limb here, but I think Pyle has it in him to spoil another young up-and-comer's perfect storyline. I think he gets in close and stays there, turning this into a street fight.

Hamman: Gustafsson via TKO. "Even though he smacked me upside the head, I'm a big fan of Alexander Gustafsson. I think he'll knock him out. Even though Hamill's a tough dude, the TKO's going to happen."
Fowlkes: Gustafsson via decision. Knocking out Matt Hamill is a task that has proved to be beyond some real heavy hitters, so I don't see Gustafsson finishing it. Instead, I think he stuffs takedowns and outpoints Hamill from a distance.