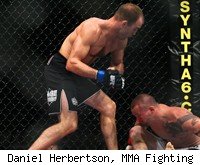 Ebersole fought Chris Lytle in February on short notice and who put the rest of the MMA world's colorful characters on notice when he took off his walkout shirt to reveal an arrow pointing to his chin shaved into his chest hair. His upset win netted him a $75,000 Fight of the Night bonus check – a perk of the big show that he certainly has no problem getting used to.

But rather than going haywire on his newfound UFC fame after one of the year's biggest upsets, Ebersole intentionally tempered his commitments leading up to his Saturday fight at UFC 133 against fellow veteran Dennis Hallman. In other words, he only put himself out there a little more than his last 15 fights in Australia.


Ebersole grinded out wins on the Midwest regional circuit early in his career, fighting on the same cards as UFC vets Miguel Torres and Stephan Bonnar. In fact, Bonnar's first pro fight was a win over Ebersole. The fact it took him 60 fights to get to the UFC, 15 fights after moving to Australia, may be testament to his patience. Now that he's there, he's content to keep his patterns as close to intact as he can.

"I think the only change in my life is that I'm a firm member of the UFC welterweight division," Ebersole said. "I have a contract that'll be honored. That's the biggest change. As far as training and lifestyle, everything else has pretty much been the same."

After his appearance on "The MMA Hour," Ebersole said he would be going mostly into media seclusion to finish preparing for his fight, which is on the main card at the Wells Fargo Center in Philadelphia – and his first fight in America in more than four years.

Ebersole, who wrestled collegiately at Eastern Illinois University, a school that also produced UFC fighters Matt Hughes and Mike Russow, said he stayed in Australia for the bulk of his training camp for Hallman (43-13-2, 1 NC, 3-4 UFC), bringing in wrestlers to give him good workout tests. But he believes in the future, he may have to train in the States if he is to make a push up the UFC welterweight ladder.

"When it comes to finding wrestlers to challenge me, I'm going to have to come to America to do that," Ebersole said. "I looked at a couple different camps back in early May. In the future, I think I will spend a bit more time training in America, but I'm not sure how that will come about. I'm going to be a nomad."

When he does stay put in Melbourne, Ebersole thinks he will now reap some of the benefits of fighting on consecutive main cards of UFC pay-per-views. The name recognition will get him more instructional work.

"There have been more seminar requests," Ebersole said. "The UFC debut has helped my profile as a coach, especially in Australia. Being one of the bigger name guys over there, I've got kind of a bit of a market over there to myself at the moment."

With a win over Hallman, whom Ebersole said he expects to be "one of the better Dennis Hallmans we've seen," he's likely to have students looking for more than just a few lessons from the American with the crazy chest hair.