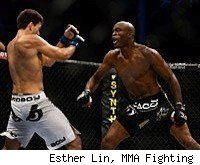 PHILADELPHIA -- Back in May, MMA Fighting reported that a UFC event in Abu Dhabi was possible for December. Now, we have confirmation that it's officially on the UFC's radar.

On Thursday, UFC president Dana White said that there is a "higher than 50-50" chance that the promotion does its yearly New Year's weekend show in the capital city of the United Arab Emirates.

The UFC historically prefers to do the big annual show in Las Vegas, but the calendar works against them this year, with the last Saturday of the year falling on New Year's Eve, obviously a popular party night. That would cut drastically into gate receipts in a party town like Vegas, but with limited trips to foreign lands, it could draw better abroad.

The UFC first visited Abu Dhabi in April 2010 with UFC 112, a card which hosted two championship bouts, including Anderson SIlva's curious and infamous decision win over Demian Maia. To date, it has been the first and only event held there since a portion of the promotion was purchased by Flash Entertainment, a government-owned company.

For a time, the UFC entertained the idea of hosting a show in March of this year before venue issues derailed the possibility. Much like their first go-round there, the UFC would have a specially built arena constructed just for its event if they chose to return.