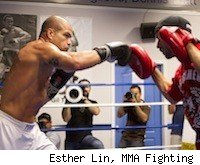 Tito Ortiz seemed to take pleasure in making the sportsbooks bleed when he shocked everyone in Las Vegas, but how many more surprises does he have left in him?

And will Vitor Belfort bounce all the way back from his loss to Anderson Silva, or is a part of him still worried about the Steven Seagal special that's always just out of his field of vision, yet constantly rushing toward his chin?

To answer these questions and more, let's examine how oddsmakers see the action at UFC 133 going down.

The Ortiz bandwagon may have picked up a lot of new passengers at its last stop, but oddsmakers seem to be keeping their expectations realistic. It's not hard to see why. Ortiz's win over Ryan Bader was over almost as soon as it began, so there's not much of a scouting report to base this comeback narrative on. The best thing Ortiz has going for him is the fact that Evans hasn't fought in over a year. Who knows, "Suga" might be as rusty now as "Rampage" Jackson was when he beat him last May. If not, you have to give Evans the edge in speed, athleticism, wrestling ability, power -- everything, basically. So what does Ortiz have? How does he win this and enable you to cash in on the underdog bet you missed in his last go-round? I don't know, intangibles maybe?
My pick: Evans. It's a parlay pick all the way, but I just don't see Ortiz pulling off another upset. said the same thing when he fought Bader, though...

Let's not kid ourselves, we know who Belfort is by this point. He's the guy who's hell on wheels in the first three minutes of any fight, but whose chances of victory fade in the later rounds. It's as if he's always waiting to find out whether he's going to win or not. By the time he hears the words, 'round two,' he starts to wonder. By round three he's downright doubtful. The question is, can Akiyama take him there without first taking too much punishment? Akiyama needs this one worse than Belfort does, but he probably lacks the finishing power to actually put "The Phenom" away. A decision is his best bet, but it won't favor him if he spends the early going getting knocked around by the faster, more explosive Brazilian. Can he stay competitive long enough to exploit Belfort's weakness in the later rounds? That's the big money question.
My pick: Akiyama. You know what? Let's get crazy. In straight-up picks, you have to go with Belfort, but at nearly 3-1 Akiyama is a decent enough underdog to warrant small action. Who else is feeling financially reckless? Right? Guys?

I'm not entirely sure what's making this line as close as it is. Are oddsmakers unable to look past Rivera's recent loss to Michael Bisping, or do they see something in Philippou that the rest of us don't? Not that he sucks, mind you. But he lost to the fairly mediocre Nick Catone at UFC 128, and before that got submitted during the elimination phase of TUF 11. Maybe he's still a work in progress, but he's up against a vet here. Going from Alessio Sakara to Philippou, Rivera didn't have to adjust his preparation or game plan too much in the final weeks. He's basically getting a less dangerous, less experienced version of Sakara here. It's his fight to lose, and at this point in his career he can't afford to give away fights like this.
My pick: Rivera. It's another one for the parlay, but there's at least some chance to capitalize on line that's closer than it ought to be.

Few people are talking about it, but this might be the toughest fight to pick on the entire card. Here we have two savvy vets, both doing better than the UFC likely thought they would, and it's hard to say what we should expect from either. Often Hallman's approach against bigger, taller fighters has been to spend the entire fight in the clinch or on the mat, suffocating and frustrating them. That's not likely to work against Ebersole, but then again Ebersole is always at least somewhat likely to goof around enough that he misses a key opportunity or two. Still, after his surprise win over Chris Lytle, Ebersole has to know that this is one of those strike-while-the-iron-is-hot moments.
My pick: Ebersole. His size and durability will prove problematic for Hallman, but it's going to be close.

I know nobody wants to bet against the wiz kid MacDonald, and the odds reflect that, but let's stop and think for a moment. The last time Pyle fought one of the UFC's much-hyped youngsters was when he faced John Hathaway at UFC 120. He ran all over the kid and took the surprise decision, thanks mostly to his superiority on the mat. Is it so unreasonable to think he could do the same to MacDonald? Okay, so MacDonald is more well-rounded and probably just a better athlete than Hathaway, but don't underestimate the value of Pyle's experience. He's not going to be intimidated by a hard-charging kid with backne, and he's got just the right amount of mean streak to relish an opportunity to smash an up-and-comer and surprise the oddsmakers.
My pick: Pyle. I don't know what it is, but I see an underdog with an edge in experience and straight-up meanness, and I can't stay away. I tell you, it will be my undoing for sure.

- Alexander Gustafsson (-170) over Matt Hamill (+140). Gustafsson is nastier than a lot of people realize. If Hamill can't keep him on his back -- and I doubt he can -- he's in for three rounds of facial reconstruction.

- Mike Pierce (+115) over Johny Hendricks (-145). Hendricks has been beating up on a lot of guys with serious deficiencies in the wrestling department, but that's not Pierce. He's tough, durable, and has honed his finishing skills of late.

The 'For Entertainment Purposes Only' Parlay: Evans + Rivera + Ebersole + Gustafsson.