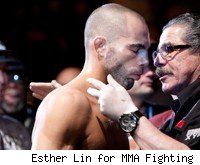 Mike Swick's return to the Octagon has again been put on hold.

The welterweight, who has been out of action since UFC 109 in February 2010, has been forced out of UFC 134 later this month with a knee injury. The UFC made the announcement late Thursday, and Swick confirmed the news on his official Twitter feed.

Swick's opponent, Erick Silva, is awaiting a new opponent. The UFC said an announcement will be made soon for a new fight for the Brazilian, who is making his UFC debut.

Swick (14-4, 9-3 UFC) said on Twitter he suffered the injury while wrestling: "Yes rumors are true. I tore my knee today wrestling. Will get MRI results in am but Dr thinks torn MCL, ACL and possibly meniscus. Got my health and size back and was having best fight camp of my career then one small twist during training. Can't catch a break sometimes."

Swick has dropped two straight fights after starting his UFC career 9-1. After his first UFC loss, a unanimous decision to Yushin Okami at UFC 69, the TUF 1 competitor dropped down from middleweight to welterweight and rattled off four straight wins.

But against Dan Hardy at UFC 105, he dropped a unanimous decision that would have earned him a title shot against welterweight champion Georges St-Pierre. He followed that up four months later with a loss to Paulo Thiago, who choked him unconscious in the second round.

Then Swick's problems really began. A stomach ailment kept him sidelined until this past January, when he was scheduled to face David Mitchell at the Fight for the Troops 2 show. But Mitchell pulled out with an injury, and Swick decided he could use more time to recover from the stomach issues.

Silva (12-1), a highly touted Brazilian jiu-jitsu black belt, has not lost since December 2006. All his fights have been in his native Brazil, and seven of his 12 wins have been by submission.

UFC 134 will be the promotion's return to Brazil for the first time since 1998. The pay-per-view, headlined by a middleweight title fight between Anderson Silva and Okami, will take place at the HSBC Arena in Rio de Janeiro.