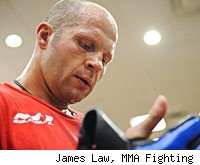 Dana White's mantra after UFC parent company Zuffa purchased its biggest rival, Strikeforce, was "Business as usual." What he supposedly meant was that Strikeforce could continue to run as its own independent entity.

What White actually meant was that he would add another promotion to his tombstone.

On Saturday night, after Dan Henderson beat Fedor Emelianenko, I asked Scott Coker, the man who's supposedly still in charge of Strikeforce, if he wanted Fedor to return. Coker told me emphatically that he did, in fact, want Fedor back in the Strikeforce cage. And then on Thursday, UFC President Dana White announced that Strikeforce was done with Fedor.

If you're shocked to learn that White -- not Coker -- gets final say on these things, you're probably one of those people who seriously believed it a couple years ago when UFC.com ran an April Fool's Day story saying it was going to build an arena in Fedor's hometown of Stary Oskol.

And, of course, Fedor is just the tip of the iceberg. Here's a look at what has happened to some of the other high-profile fighters who were on the Strikeforce roster at the time of the Zuffa purchase:

Alistair Overeem: The Strikeforce heavyweight champion has been released amid conflicts between the UFC and Overeem's managers at Golden Glory, despite a victory over Fabricio Werdum that clearly established Overeem as the top heavyweight in the world outside the UFC.

Mayhem Miller: One of Strikeforce's most popular names, Miller has moved to the UFC, where he'll coach on the upcoming season of The Ultimate Fighter.

Marloes Coenen: The woman who was Strikeforce's 135-pound champion at the time of the Zuffa purchase lost her belt and then lost her spot on the Strikeforce roster, as Zuffa cut ties with most of Overeem's Golden Glory teammates.

Cris Cyborg: The 145-pound women's champion and the generally recognized top female in MMA hasn't fought in more than a year and doesn't have any fights scheduled.

Dan Henderson: The Fedor fight was the final fight on Henderson's Strikeforce contract. It's hard to imagine Zuffa re-signing him to Strikeforce -- if they're going to keep doing paying Henderson, they'd want him fighting the marquee light heavyweights in the UFC.

What's the point of keeping Strikeforce around if Zuffa isn't going to keep Strikeforce's best fighters around? There's just no sense in keeping this promotion going, except that Strikeforce still has that Showtime contract to fulfill.

Showtime has to see what the rest of us can see: Strikeforce is going in the direction of Pride and Affliction before it: A promotion that put on a lot of great fights, but was ultimately swallowed whole by the UFC.