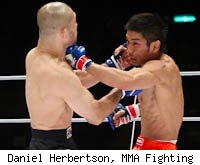 TOKYO -- DREAM's second bantamweight tournament for the year was finally made official as all four bouts for the opening round of the DREAM Bantamweight World Grand Prix were announced on Friday for DREAM.17.

DREAM.17, which is set to take place on Sept. 24, 2011 at the Saitama Super Arena in Saitama, Japan, will be the first numbered event of the year for the leading Japanese promoter and will take place almost exactly one year after DREAM.16, which was held on Sept. 25, 2010 in Nagoya. The event is also set feature DREAM lightweight champion Shinya Aoki taking on former WEC ace "Razor" Rob McCullough in a non-title match and the featherweight debut of Tatsuya Kawajiri.

The full card and a breakdown of the Bantamweight GP participants after the break.

Hideo Tokoro's (30-23-1) penchant for highly entertaining bouts has led to a record that is not entirely indicative of his true skill level. His impressive Bantamweight Japan GP victory earlier this year however showed a distinct change in attitude and was much more cautiously fought. Tokoro holds victories over fellow tournament participants Masakazu Imanari and Abel Callum.

Antonio Banuelos (18-7) fought a record 14 times for the now-defunct World Extreme Cagefighting and is coming into the bout on the heels of his loss to a highly motivated Miguel Torres at UFC 126. Banuelos holds notable wins over Scott Jorgensen, Kenji Osawa and Cole Escovedo .

Takafumi Otsuka (12-8-1) steps in for Kenji Osawa. Osawa qualified for the World GP with his third place in the DREAM Bantamweight Japan GP earlier this year. A shin injury sustained in training forced Osawa out of the World GP. Otsuka, a former DEEP featherweight champion and reigning DEEP bantamweight champion, has had problems definitively winning fights as of late and has lost by split or majority decision four times in the last two years. His recent performance against Hiroshi "Iron" Nakamura however was highly aggressive, although the finish did evade him.

Bibiano Fernandes and Takafumi Otsuka first fought in 2009 in the DREAM Featherweight GP. On that occasion, Fernandes turned in a dominating wrestling-centric performance and handily took the decision.

Abel Cullum (18-5) a two-time King of the Cage champion, also competed in the 2009 DREAM Featherweight GP but fell to Hideo Tokoro in one of the most thrilling bouts of the year. Cullum fell short in his last two bouts – five-round KOTC title matches against Jimmie Rivera and Jared Papazian.

Yusup Saadulaev (7-0-1), Russian-born and America-based, is still somewhat untested having only fought on the regional circuit. Saadulaev has a tendency to want to stand and trade however his real strength is on the mat, with five of his seven wins coming via submission.