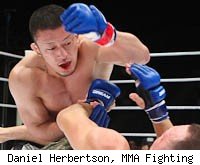 After two recent failed title attempts and over seven years as a top level lightweight, Tatsuya Kawajiri will be dropping to featherweight to meet Joachim Hansen at DREAM.17 on Sept. 24 at the Saitama Super Arena in Tokyo, Japan.

Although the 33-year-old Kawajri has recently turned in very impressive victories over Josh Thomson and Drew Fickett, disappointing first-round losses to DREAM lightweight ace Shinya Aoki and Strikeforce lightweight champ Gilbert Melendez leave Kawajiri few options at lightweight and so he drops to 143 pounds to make his divisional debut.

Hansen, a fellow former Shooto 154-pound champion, also made the decision to drop to featherweight after losing his DREAM lightweight title to Shinya Aoki in 2009. Hansen initially struggled with the weight limit, looking drawn out in losses to former DREAM featherweight champion Bibiano Fernandes and Hiroyuki Takaya, but has since rebounded to put together three consecutive wins.

The bout is actually a rematch of an ill-fated 2006 Shooto welterweight title match. On that occasion, Hansen caught Kawajiri, the defending champion, with a kick to the groin only eight seconds into the bout. Kawajiri was unable to recover and so Hansen was handed the disqualification loss.