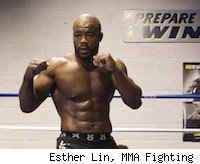 PHILADELPHIA -- There was a time a few years ago when Rashad Evans was crushed he didn't get a rematch with Tito Ortiz in a timely fashion. In fact, Evans said that at the time, the change in plan was so depressing, it affected part of his next training camp. But as time went on, Evans largely forgot about a fight he once greatly desired. As Ortiz struggled, Evans surged, eventually rising to the level of UFC light-heavyweight champion in 2008.

While Ortiz finally found the winning side of the ledger last month, Evans has steadily stayed near the top, and a win at Saturday's UFC 133 will likely earn him a chance to once again fight for the title. But as far as Evans is concerned, that's about all there is to gain here. In his mind, Ortiz has no aura left and his physical skills have deteriorated, making a fight he once craved a simple roadblock on the way back to the title.

"Tito's not the same fighter he was," Evans said. "To me, in my mind, he lost the whole Tito Ortiz thing. He lost it. He hasn't been very consistent. Sometimes he'll look good, sometimes he looks bad. He fell from that level."

Asked if the win would mean as much as it would have meant four years ago, Evans shook his head.

That doesn't mean that Evans doesn't have any motivation for the fight. After sitting on the sidelines since his win over Quinton "Rampage" Jackson last May, Evans is chomping at the bit to get back in the cage. He also wants to flash the new skills he's picked up working with a new set of coaches, and of course, there's the possibility of gold at the end of his rainbow.

Evans (15-1-1), who famously fought Ortiz to a draw in July 2007, says that match served as a coming-of-age moment for him. It was his first time in the spotlight, in a fight against someone with far more experience than he. He started slowly in that match, losing the first round before picking up steam as he went on. An Ortiz illegal fence grab sealed the draw as he had one point deducted from his score.

Evans took his lessons from the fight and says he has a good handle on what to expect from Ortiz the next time around. He says that between then and now, Ortiz has gotten noticeably worse at some aspects of the game.

Evans was told that Ortiz recently said that being in Philly, he would make this moment his personal "Rocky" movie. Evans says Tito can say whatever he wants to get himself motivated, but he's still going to have to show up to fight, and there will be no director calling cut "so Rocky can win."

Despite the rematch not meaning quite as much to him as it would have a few years ago, Evans has the chance to put that draw behind him once and for all. Evans sounds like it's a foregone conclusion, like it's a fight that is just a space-holder in his career, rather than one against a former champion.

"I don't have any doubt," he said. "I know what I can do against Tito. Tito knows it. Tito's the one who has all the questions in my opinion, because he had the flash knockdown against Bader before he finished him off. I know he's thinking, 'Man, I wonder what would've happened if this fight would've went on?'"