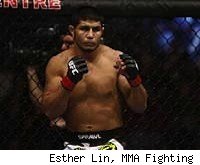 The move was expected following the losing streak, but had not yet been confirmed. A high-ranking UFC source confirmed it on Thursday, however.

After debuting in the UFC during season two of The Ultimate Fighter, Stevenson won five of his first six bouts and rose to become the No. 1 contender in the UFC's lightweight division. At UFC 80, he lost to BJ Penn via rear naked choke submission, however.

After that, his career stalled out a bit, as he went 3-6 in his last nine UFC fights before being released. Overall, Stevenson is 31-14 in his career, and he went 8-8 in 16 UFC fights dating back to November 2005.

In his last fight, termed a "must-win" at the time, he dropped to the featherweight division in hopes of reviving his career, but lost in a unanimous decision to Javier Vazquez at the UFC Live: Kongo vs. Barry event.