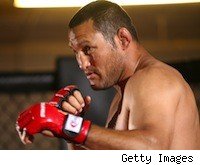 PHILADELPHIA -- Fresh off his win over Fedor Emelianenko at last weekend's Strikeforce/M-1 Fedor vs. Henderson event, Dan Henderson has the good fortune of becoming a free agent.

Well, maybe it's good fortune. Given the current MMA business landscape, that remains to be seen. But Henderson is likely to get interest and offers from several promotions in the coming days and weeks. And one call he can expect is from the UFC.

Company president Dana White confirmed that the organization would entertain the possibility of bringing Henderson back for his third go-round. He previously fought for the UFC in the 1990s, winning the UFC 17 middleweight tournament. He then fought exclusively for Japanese promotions until returning to the UFC in 2007. He competed five times, going 3-2, but signed with Strikeforce shortly after his highlight-reel knockout of Michael Bisping at UFC 100.

"We'll see what happens," White said. "Hendo and I have had some history in dealing [together]. We'll see if we can figure something out and get him back in the UFC."

Henderson's four-fight deal with Strikeforce ran out after his win over Emelianenko, despite the fact that he is currently the light-heavyweight champion.

His money demands could prove an insurmountable object, as they were the last time he negotiated with UFC. While he got a nice raise out of Strikeforce, there isn't a competing organization to play offers against now that both Strikeforce and UFC are owned by the same company.

If Henderson does ink a deal with UFC, he will be one of many recent champs to depart Strikeforce or be otherwise unavailable to them. First, welterweight champ Nick Diaz vacated the title to move to UFC. Then heavyweight champ Alistair Overeem was cut. Meanwhile, women's featherweight champ Cris Cyborg remains unsigned and out of action, and just-defeated bantamweight champ Marloes Coenen was cut.

What this means for Strikeforce's long-term viability is anyone's guess, but it won't be easy to replace so many headliners in short order. White added that Zuffa co-owner Lorenzo Fertitta is expected to travel to New York next week to meet with Showtime.

"What we've said about Strikeforce is this thing's got to run like a business," White said. "If we can run this thing and this thing isn't losing a ton of money, then Strikeforce will stay alive and be rebuilt. We'll see what happens."