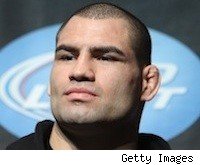 PHILADELPHIA -- The surgically repaired shoulder of UFC heavyweight champion Cain Velasquez has fared well in workouts, and he is on track for a UFC 139 title match with Junior dos Santos, a source with knowledge of the situation told MMA Fighting on Thursday.

The bout has yet to be announced by the UFC, but is expected to be made official shortly.

A source with knowledge of the situation told MMA Fighting that both fighters verbally agreed to the bout, which will take place at the HP Pavilion in San Jose, California, the home city of Velasquez's gym, American Kickboxing Academy.

Velasquez was first injured during his UFC 121 championship victory over Brock Lesnar, tearing his right rotator cuff, a setback that was expected to take between 6-8 months to heal. After a long layoff and rehabilitation, he recently ramped up his workouts and is said to be progressing well.

In the interim, No. 1 contender Dos Santos took a bout with Shane Carwin, winning a convincing unanimous decision at UFC 131.

Barring any unexpected setbacks, Velasquez will put his 9-0 record on the line on November 19, essentially in his backyard.