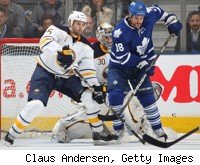 The UFC will be back to Toronto for the second time this year when the promotion brings UFC 140 to the Air Canada Centre on Dec. 10.

The UFC confirmed the event and date via Twitter Wednesday after UFC co-owner Lorenzo Fertitta revealed the details Tuesday to ESPN.com.
The first Toronto show this past April was a huge financial success for the promotion. Headlined by Georges St-Pierre defending his title against Jake Shields, UFC 129 became the largest UFC event in North American history with an official attendance of 55,724 and gate of $12.1 million.

With UFC 140 taking place at the Air Canada Centre instead of the Rogers Centre, the UFC will go back to running average-sized shows to stay true to the UFC experience. The Air Canada Centre, home of the NHL's Toronto Maple Leafs, seats at a max of just under 20,000.

No fights have been announced yet for UFC 140, which will take place a week after The Ultimate Fighter 14 Finale.