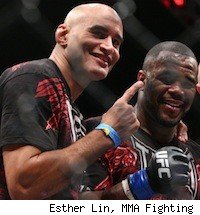 PHILADELPHIA -- It's been a long time between fights for Rashad Evans, and since then, much has changed. The most heavily publicized of those changes was a switch in camps. A longtime member of the Team Greg Jackson squad, Evans moved from the southwest to sunny Florida, where he's set up camp with a group that calls themselves the "Blackzilians."

The man running the team is Mike Van Arsdale, a retired fighter who has a great deal of familiarity with Evans. Once a member of Team Jackson himself, Van Arsdale was an Evans' teammate before moving into the coaching realm. He was in Evans' camp when he fought Tito Ortiz the first time back in 2007, and this time, he's at the helm as Evans hopes to improve upon the unsatisfying draw he and Ortiz engaged in.

Asked if he thought Evans would win and finish Ortiz at UFC 133, Van Arsdale smiled.

"Yeah, I'm pretty sure he will," Van Arsdale told MMA Fighting. "I would say probably in the second round. But it could happen in the first round, too, depending on whether or not there's a little ring rust. If there is and he's not pulling the trigger, that's a different story, but in my mind, I know he'll pull the trigger. I really feel like he will. I've seen him work for a long time. I've gone through many camps with him. I know how he looks and feels. He's very confident right now. More confident than ever."

Van Arsdale's prediction came just a few moments after acknowledging the unpredictable nature of MMA. His confidence in his charge comes from the knowledge that Evans has done everything right for this camp, which technically began in January, when Evans was preparing to fight Mauricio "Shogun" Rua.

Evans underwent rigorous strength and conditioning changes, adjusted his diet habits, and refined his kickboxing and wrestling technique. And just as importantly, he comes into the fight healthy, something that is not always a given in MMA.

Even with Ortiz carrying the momentum of his recent UFC 132 win over Ryan Bader, Van Arsdale has no doubts about the outcome. In fact, he hopes the momentum causes Ortiz to turn up the aggressiveness, believing Evans will exceed it.

"Hopefully he comes right to Rashad and we can get this thing started," he said. "If he hasn't made improvements since his last fight, he's going to be in trouble right away. He needs to have made major improvements between that fight and this one to beat Rashad. When Tito and him lock up, he's not going to feel the same guy he felt at UFC 73. That's for sure."