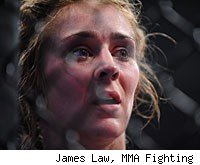 There's clear tension at the moment between Golden Glory and Zuffa, the parent company of both the UFC and Strikeforce. Although Zuffa can point to the fact that Coenen, Einemo and Valentijn Overeem were all coming off losses, cutting them all and also cutting Alistair Overeem suggests that Zuffa doesn't want to deal with Golden Glory (which functions as both a gym and a promoter) at all.

However, de Jong told Ariel Helwani that Golden Glory is not banned from Zuffa, noting that Sergei Kharitonov is part of Golden Glory and is still with Strikeforce. Kharitonov will fight Josh Barnett on September 10 in the semifinals of the Strikeforce Heavyweight Grand Prix, and de Jong wrote that after this news, Kharitonov "now really wants to be the SF GP champ!"

The decision to cut Coenen is also another sign of Zuffa's lack of interest in women's mixed martial arts. Coenen just lost the women's 135-pound title to Miesha Tate on Saturday night, and she's one of the best and most recognized female fighters in the world. Her departure hurts the women's division, but Zuffa may not much care about its women's division.

Despite the UFC saying it would be "business as usual" when Strikeforce was purchased, the company is seeing rapid turnover among some of its best fighters. Of the seven fighters who were Strikeforce champions when Zuffa purchased the company early this year, two (Overeem and Coenen) have been released, two more (Dan Henderson and Cris Cyborg) have had their contracts expire and may not return to Strikeforce, and one (Nick Diaz) has been brought over to the UFC.