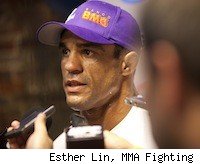 PHILADELPHIA -- Vitor Belfort stood in his own puddle of sweat, waiting to begin a round of interviews near a back wall of the Joe Hand Boxing Gym. Across from him, less than 30 feet away was the noted boxing champion Bernard Hopkins, firing off combinations at a trainer holding focus mitts. For a moment, Belfort watched him intently, his mind drawing parallels between careers.

Like Hopkins, Belfort has been a mainstay of his sport for years. Like Hopkins, he's still relevant. And also like Hopkins, people wonder how long he can stick around and perform at a high level. At 34 years old, Belfort is more than a decade younger than the 46-year-old "Executioner," but combat sports are as a rule, a young man's game.

Like Hopkins, he feels he's still the exception. And he still harbors dreams of winning a UFC championship.

"Sure," he said when asked if he thought of again wearing UFC gold. "I overcome. Nobody's going to take my dream away. I don't live by desire, I live by dream. What I'm trying to do is climb the mountain again."

If Belfort is able to do it, it would be a remarkable feat. He won the UFC heavyweight tournament in 1997, when he was just 19 years old. In 2004, he captured the light-heavyweight championship. If he were to win a title before his career is up, he could boast of capturing crowns in three different decades.

To do that, he'll have to start by getting past Yoshihiro Akiyama at UFC 133. The Japanese fighter is competing with motivation, hoping to honorably represent his homeland of Japan just a few months after devastating natural disasters rocked the country. Though his family was not badly affected, Akiyama stepped away from a proposed March fight, pushing his return back until now.

Belfort is also hoping to rebound from some adversity, though his took place on a personal scale. At UFC 126, he faced Anderson Silva with the hope of winning the middleweight championship, but Silva turned back another challenger, knocking Belfort out at 3:25 of the first round.

"It's part of life," he said. "To overcome ... you have to overcome something. That was one of the mountains I had to climb. Here I am, stronger than ever, climbing my mountain again and looking for the title shot soon."

Always a game fighter, Akiyama has the added incentive of trying to reverse a two-fight losing streak. His last bout was a UFC 120 unanimous decision loss to Michael Bisping. Akiyama has indicated that he will stand and trade with Belfort, and that he harbors a desire to follow in Silva's footsteps and knock Belfort out.

"He's a tough opponent," Belfort said. "He's going to be good, bring a war and I'll be ready.

"I think he's going to try to stand with me, sure," he continued. "He's a very tough opponent. He's going to look for the opening. I will not give it to him."

If, as expected, Belfort emerges victorious, he can more reasonably think about fighting for a title once more. For now it is, as he said, a climb. Not one for old and weary legs, but for youthful ones. He had no farther than 30 feet to look to see someone who had completed the ascension. Belfort said he does not plan on fighting as long as Hopkins has, but that he finds inspiration in someone like Hopkins, a fighter who he says like him, is part of the past, present and future of his sport.