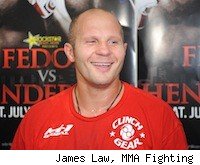 After every event is over, we instinctively begin to wonder what's next. Whether it's for the promotion, the fighters or the sport, our minds move forward to ponder the future.

So after every major event, The Forward Roll will take a look into the coming weeks and months, examining several key fighters who just competed and the endless possibilities that might come their way.

Today, we look at some of the key participants of Strikeforce & M-1 Global: Fedor vs. Henderson, and where they might go from here.

Dan Henderson
Free agency beckons for the 40-year-old riding the wave of a three-fight win streak after defeating Fedor Emelianenko this past weekend. From there, there are three possibilities. He can re-sign with Strikeforce, he can head back to the UFC, or he can become an MMA mercenary and look for the best deals wherever he can find them, from promotions looking to bring in a big name.

Because of the current business landscape in MMA, it won't be easy for Henderson to get a price he wants. Remember, UFC president Dana White is on record as saying he forced Henderson to sign with Strikeforce back in 2009 after suggesting Hendo wasn't worth the money he was requesting. Of course, that was two years ago, and Hendo is 3-1 since, so White may reconsider.

That said, I think it's crucial for Strikeforce to retain Hendo. After all, look at Strikeforce's current list of titleholders. Heavyweight champ Alistair Overeem was just cut, women's 145-pound champ Cris Cyborg has been inactive during a year-plus contract negotiation/dispute, and welterweight champ Nick Diaz relinquished his belt to move to the UFC. If Strikeforce wants to remain a viable product on Showtime through the length of its TV deal, it's hard to imagine that they will let another champion walk.

Fedor Emelianenko
After three straight losses, Emelianenko faces a major decision in either continuing his career or calling it quits. After the fight, he told MMA Fighting that he could make a decision on his future "within the next month, maybe even earlier than that." After each of his previous two fights, he's pondered it and come back. After his loss to Henderson, he seems to be considering it once more.

Given his expensive deal, Fedor may not have the opportunity to fight in Strikeforce again. It's likely that the promotion will cut him and use the savings on several other fighters. He also could be asked to renegotiate a smaller deal.

Prediction: Strikeforce cuts Emelianenko, but he decides to fight one more time, perhaps for the M-1 Global promotion, of which he is a co-owner. As far as an opponent, how about the newly available Alistair Overeem? Sure it seems unlikely, but it would be the biggest money fight for both of them if they can find a way to fund it.

Miesha Tate
The 24-year-old Tate won her first major title by submitting the experienced veteran Marloes Coenen. Watching from the stands was the former weight class champion, Sarah Kaufman, who is coming off a two-fight win streak and is almost certainly the next in line for the belt, making this prediction an easy one.

Prediction: Tate makes her first defense against Kaufman, but the timeframe is up in the air until Tate gets back results from an MRI on a banged-up knee.

Tim Kennedy
Kennedy used his grinding style to wear down Robbie Lawler and earn a unanimous decision victory. It says a lot about the lack of depth in Strikeforce's middleweight division that 26-year-old Luke Rockhold, coming off three straight Challengers series appearances and a 19-month injury layoff, was given a title shot upon his return. That takes place on Sept. 10. It's almost a lock that Kennedy gets the winner.

Paul Daley
Daley's takedown defense looked much improved against Tyron Woodley, but he still couldn't stay off his back long enough to land a fight-changing shot. That's two straight losses for him, and Strikeforce may not be in a hurry to bring him back. Given that, he might look back across the pond, where he is a big draw and can get better matchups for his style.

Prediction: Daley takes his next fight in the UK, facing Nate Marquardt at a BAMMA event

Tyron Woodley and Tarec Saffiedine
Both men captured decisions on Saturday using completely different formulas, Woodley utilizing his wrestling and groundwork, and Saffiedine with a strong standup performance. There are rumblings that the two will face each other and determine a new welterweight champion, but I'll go with another option.

Prediction: Woodley and Saffiedine are among the welterweights included in a four-man mini-tournament used to crown a new champion.