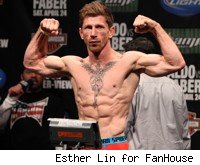 At UFC 125 on Jan. 1, Brown suffered a loss to Diego Nunes and three days later accepted a fight against Rani Yahya at UFC Fight for the Troops 2 on Jan. 22.

"I thought it would have eased my mind and cut some of my problems down," Brown said Monday on The MMA Hour. "But I doubled my problems with that one."

In the span of three weeks, Brown, who ended up losing to Yahya via unanimous decision, had stringed together back-to-back UFC losses.

"I was so upset that I want another chance," Brown said. "And then I didn't really give myself the time to heal like I should have. I was still limping around for another week-and-a-half -- cause it was a 15-minute war we were in. It wasn't an easy fight that me and Nunes were in and I think I just got worn out."

There were teammates who didn't want him to take the fight, but that wouldn't stop him.

"They didn't want to tell me it was a bad idea," Brown said. "-- I'm talking specifically about Darrell Gholar, my wrestling coach. He thought I needed more time to heal up and be ready, but he saw that I was going to do it so he had to jump on board. But he really didn't want to do it."

As he heads into a must-win bout at Satuday's UFC 133 against Nam Phan, it'll be a little over six months since he last fought, and that for him, feels like an eternity.

"I'm going crazy, I can't wait to go in there and get the job done. I need this one bad. And I'm amped."