Leonard Garcia Out; Jim Hettes Meets Alex Caceres at UFC on Versus 5 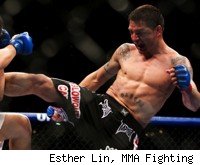 Another injury has hit the UFC's card in Milwaukee next week, this time to one of the featherweight division's fan favorites.

An injury has forced Leonard Garcia out of his preliminary card fight against Alex Caceres at next week's UFC on Versus 5 show. The UFC announced Garcia's injury Tuesday and said promotional newcomer Jim Hettes will step in for the fight on short notice.

UFC on Versus 5 is the promotion's debut in the state of Wisconsin and will take place at the Bradley Center, downtown in the state's largest city.

Garcia (15-7-1, 2-3 UFC) was looking to get back in the win column after a March loss to Chan Sung Jung. That fight, which Jung won by rare twister submission, was a rematch from their WEC 48 split decision, which was controversially won by Garcia. The submission loss snapped a streak of four straight split decisions for Garcia – two wins, a loss and a split draw.

Caceres (5-3, 0-1 UFC), a cast member of Season 12 of "The Ultimate Fighter," on which he gained prominence for his "Bruce Leeroy" moniker, lost his official UFC debut in March when he was submitted by Mackens Semerzier.

For his new opponent, Caceres will be matched up with an unbeaten Pennsylvanian in Hettes (8-0) who has all eight of his wins by submission. Hettes was eyed by the UFC last year, but was unable to sign with the company because of commitments to another promotion.

The Caceres-Hettes fight will be part of the preliminary card in Milwaukee. The main card is headlined by a welterweight bout between former title challenger Dan Hardy, looking to snap a three-fight skid, and Chris Lytle. The co-main event features lightweight contenders Jim Miller, on a seven-fight winning streak, and former WEC 155-pound champion Ben Henderson.