Over 70 Percent of Tickets Were Comped at Strikeforce Challengers 17 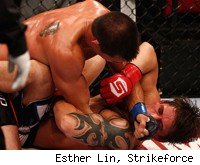 Over 70 percent of the crowd at the Palms Casino Resort watched Strikeforce Challengers 17 on July 22 live for free, according to official numbers released Monday by the Nevada athletic commission.

The Las Vegas event, headlined by a third meeting between Bobby Voelker and Roger Bowling, sold a total of 458 tickets for a gate of $42,987.50. Meanwhile, 1,418 tickets were papered and 98 left unsold.

The next Challengers event takes place Aug. 12 with Jorge Gurgel vs. Joe Duarte in the main event.