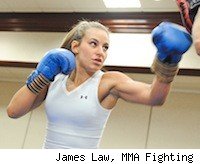 On Monday morning, less than 48 hours after her Strikeforce women's bantamweight championship win, Miesha Tate was sitting on her couch, icing her banged-up knee. On the other end, just by her feet, was her newly won prize. Both the icepack and the title belt were symbolic of the journey that took her to the top.

The 24-year-old Tate won the No. 1 contendership nearly a year ago after capturing a one-night tournament. She then waited for her title opportunity, only to miss out on the chance due to an injury. And when time came around again to face Marloes Coenen, Tate found herself in the same position, hurt and struggling through camp. In fact, according to Tate, things got so bad that she could not spar or grapple for the last month of her camp, making the fight her welcome back to both.

Despite the obstacles, she pulled off a fourth-round submission, a victory, she says, that is very much a case of mind over body.

"I knew in my heart and my mind that I would win that fight no matter what," she said on Monday's edition of The MMA Hour. "I was not going let anything hold me back. I knew it was a gamble still, because anything could happen, and that I was not the best, well-prepared. Having to go through something like that where you couldn't train properly for the biggest moment of your career really had me take a lot of mental strength. But I think the fight is 90 percent mental and 10 percent physical anyway. So despite the debilitations physically, I was ready for this fight mentally and that's the only reason I was able to win this fight."

The injuries -- which she declined to detail -- and lack of cage time before the bout didn't affect the final outcome, however. Tate (12-2) used her strong wrestling to take Coenen down on four of six attempts, and put the fight where she wanted it, on the mat.

Even though Coenen is known for an excellent submission game (14 of her 19 career wins were via tapout), Tate managed to make some headway with strikes and eventually softened her opponent up for the fight-ending arm triangle choke.

Tate said she didn't necessarily expect the position to come about beforehand, but that the choke is one of her stronger submissions. When Coenen opened herself up by putting her arm across Tate's head, she quickly jumped from side control into the transition to the sub, hoping for the finish.

With that came to a close a fight that had seemingly become personal. Earlier in the week, Coenen seemed put off my comments Tate had made, including one in which Tate said she wanted to "kill" her. During weigh-ins, Coenen said something to Tate, who didn't understand it, and at the pre-fight glove touch, Coenen smacked Tate's glove a little more aggressively than usual.

For her part, Tate offered praise and respect for the former champion, saying she meant her words as a figure of speech and that she respects Coenen "tremendously" as a "pioneer" of women's MMA. In the end though, Tate feels that Coenen's reaction to the situation might have ultimately led to her demise.

"I felt like she was angry from the beginning," she said. "She kind of let her emotions run her through the fight. She made a mistake and I was able to capitalize on it."

Next up for Tate should be a rematch with former champion Sarah Kaufman. The bout would be a rematch of their May 2009 fight, which resulted in Tate's second pro loss. Since then she's won six straight.

"I'm super excited to get a rematch with Sarah Kaufman," she said. "I've been dreaming about that since the day that I lost to her. I felt it was a pretty close fight. [It] was 29-28, she beat me two rounds to one. At that point in time, I did the best against her that anyone had done. It was a short notice matchup when I took the fight and I didn't really believe I was on that level yet. I never fought anyone of that caliber. She came in with all first-round finishes, all TKOs or KOs, and I kind of doubted myself. That taught me big lesson, and it's why I didn't doubt myself in this fight against Marloes."