Falling Action: Best and Worst of Strikeforce -- Fedor vs. Henderson 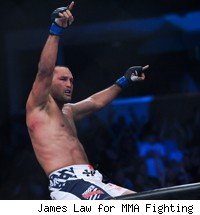 In what might have been the biggest Strikeforce bout of all time, one legend fell while another continued to ride the crest of an ageless wave. What does it all mean, and where do we go from here?

To find out, let's break down the biggest winners, losers, and everything in between from Strikeforce: Fedor vs. Henderson

Biggest Winner: Dan Henderson
A little less than a month out from his 41st birthday, a 207-pound Hendo knocked out the man who had once been the world's best heavyweight, thus guaranteeing that he can pretty much do whatever he wants with the rest of his career and still be regarded as a legend from a bygone era. From the Pride days to the UFC to Strikeforce, Henderson has built a reputation as the guy who'll fight whoever you've got as long as the money's right. The question is, now that the lucrative contract he left the UFC for is up, will Zuffa change its mind about how much Henderson is worth? He did just tear through the Strikeforce light heavyweight division and then polish off Fedor, so come on, pay this man his money. After everything he's done with his career, it'd be a real shame if he didn't get the chance to see what else he can squeeze out of it, all because Zuffa wants to do a little bargain shopping.

Biggest Loser: Fedor Emelianenko
You've got to say this for "The Last Emperor": he knows how to maintain a streak. First he went a decade without a legitimate loss, now he's gone three fights without a win. He's also lost in a variety of ways, from submission to doctor's stoppage to TKO via punches. You can argue that Herb Dean's stoppage was a little quick, but Hendo seemed poised to continue that assault on a groggy Fedor, so the end result probably wouldn't have changed. It's impossible to tell if Fedor has lost his fire for competition, since he never showed any outward signs of such a fire even when he was dominating. What is clear is that he's nowhere near the force he used to be in MMA. It's as if the clock struck midnight and he turned back into a mortal man. That happens to every fighter eventually. It's just that, as with his reign at the top, Fedor does everything so much more thoroughly and consistently than any other fighter. Even his decline is a thing to behold.

Most Impressive in Defeat: Paul Daley
While I'm sick of hearing people praise his "maturity" and poise just because he didn't sucker punch anyone after the bell -- the guy is not competing in the Special Olympics of sportsmanship here, so let's raise the bar a little -- his overall game does seem to be improving. A couple of years ago a wrestler like Woodley would have had much less difficulty getting him down and keeping him there. Now, at least it's a struggle. If that fight would have gone one more round or maybe even one more minute, Daley might have been able to pull it out. He has to know that since his striking is so dangerous and his grappling so much less so, nearly every opponent he faces is going to look to exploit that weakness. He's getting better at closing that gap in his game, and if/when he does he could be trouble for a lot of people. Up next, a battle of the troubled souls with Nate Marquardt in BAMMA? Sure, why not.

Least Impressive in Victory: Tyron Woodley
He's learning and growing, but his performance against Daley showed that he's still a wrestler first and everything else second. That's fine, but if you're going to depend on a steady stream of takedowns and top control to win fights, at least have the cardio to make it happen. As much as people complain about Jon Fitch's style, at least he doesn't get so tired that he can't keep it up. Woodley faded hard near the end, and from doing exactly what he came there to do. He's still a tremendous talent with a lot of potential, but that was not the dominant win he needed in order to get the fans fully behind him. Winning that way is still better than losing that way, but it won't have anybody lining up for tickets to see you get a crack at the title.

Most Baffling Performance: Robbie Lawler
When they started the third round, it seemed like it was Lawler's chance to pounce on a wounded and slightly winded Tim Kennedy. He'd bloodied him up in the second, made him wary of his punching power, and now Kennedy was laying back a bit, perhaps looking to protect his lead without diving for another takedown and eating another uppercut for his trouble. But instead of attacking, Lawler stood still. Instead of putting the pressure on, he waited for counter-punching opportunities. It's enough to make you wonder, did he somehow think he wasn't losing this fight on the scorecards? I'm not sure what was going through Lawler's head in those final five minutes, but it wasn't the appropriate sense of urgency.

Most (and also Least) Surprising: Miesha Tate
It's not just that she won -- that seemed perfectly plausible, if not likely before the fight. But few of us predicted Tate would submit the submission-happy Marloes Coenen. Judging by Coenen's delayed reaction to Tate's obvious efforts to set up the arm triangle choke, she didn't think it was terribly likely either. Still, what wasn't all that surprising was Tate's performance up until the finish. She rushed in for the clinch like she had a magnet in her sports bra, and she made it clear that her primary goal was to put Coenen down and keep her there all night. That didn't make for the most exciting fight, which was a shame, since women's MMA could really use a few right now to make Zuffa sit up and take notice. You can't fault Tate for fighting smart, especially since it resulted in a championship belt around her waist. At the same time, this was an opportunity to sell a larger segment of fans on women's MMA, and it didn't happen. Let's hope that in winning her own individual battle, Tate didn't lose the war.

Best Prospect: Tarec Saffiedine
The Belgian fighter seemed like he could do anything he wanted to do to Scott Smith except finish him. Not that anyone should blame him for exercising a bit of caution, considering Smith's track record for comebacks. The bloodier that guy gets, the more dangerous he becomes, so it's understandable that Saffiedine chose to ride out the clear decision rather than go all out for a finish. Smith had no answers for his diverse and deceptive striking attack, and the result was a showcase win for one of Strikeforce's most exciting young talents. With that performance he should be off the Challengers circuit for good. Though in these tumultuous times for the Strikeforce brand, it's hardly clear where he'll graduate to, or how long he'll have to stay there.

Most in Need of a UFC Contract: Tim Kennedy
While I know Kennedy wouldn't mind another crack at Strikeforce middleweight champ Ronaldo "Jacare" Souza, the Army Ranger seems like he could really benefit from some fresh competition. Strikeforce has simply not been able to find him enough fights to keep him busy, and he's at the point now where the only decent options are rematches that few people are really dying to see. Kennedy could inject some life into the UFC's 185-pound division, and my guess is the UFC wouldn't mind having another war hero on the roster. It's simple: Kennedy needs new opponents and more fights, and the UFC needs new middleweight blood. Now it's just a matter of making it happen, preferably sooner rather than later.