After Release from Prison, War Machine Looking for Fresh Start 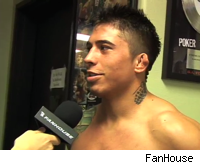 After spending a year in jail for a felony assault conviction, the fighter formally known as Jon Koppenhaver is now back among civilized society. And that, he told Ariel Helwani on Monday's episode of The MMA Hour, is proving to be a lot tougher than he expected.

"It's weird. The first few days you get out, it's real emotional," said the fighter who legally changed his name to War Machine. "You have kind of a lot of anxiety... It's culture shock. But now that I've had time to acclimate, I feel a lot better now and I'm happy to be back in the gym."

War Machine was released from the UFC in 2008 after making controversial comments about the death of former UFC fighter Evan Tanner on his MySpace blog. He later signed with upstart promotion Bellator, but was released before he ever got a chance to debut, again for his MySpace blog comments, this time about newly-elected president Barack Obama.

Now that he's out, he said, it's been something of a struggle to adjust.

"The whole year in there, I was bored a lot, but it was never real emotional or challenging for me. But my first couple days back, it was hard. Like I cried at nighttime. It was weird. It's hard to explain. ...Now it feels like I was never really in jail, like it was all a dream. It's a trip."

Once he was released, he said, he immediately returned to the gym to resume his training. But he also took some time to reflect on the problems that his behavior had caused those close to him, such as his wife, who he married shortly before beginning his sentence.

"It was a lot of sadness and a lot of anger. Like the first night I got out...my wife was asleep and I couldn't sleep the first few days. I would always look at her sleep and I started thinking about the hard year she had. My year wasn't hard; my year was boring. She had a hard year. That made me upset to think about the hardships she went through...I felt guilty. I felt guilty for putting the people who cared about me through a lot of crap. All these emotions hit me at once and I started crying like a little girl."

While in jail, War Machine said, he occupied his time mostly with reading and trying to avoid other inmates -- a goal made easier when a mersa infection resulted in him being segregated from the rest of the prisoners.

"The first six months I was in general population and the last six months I was in the hole. To be honest, most guys, they hate the hole. It's punishment. I loved it because I didn't like living with random guys in my cell, random guys I didn't know. It was awkward and I didn't like it. The only stress I ever had in there was stress over the possibility of getting into an altercation and then getting into more trouble. So once I was in the hole, that possibility ended. It was actually a big stress relief."

The worst part of the experience, he said, was the food, which was so bad "it shouldn't even be called food." Other inmates had no interest in trying to challenge a professional fighter, he said, so the main battle was against boredom.

Even then, he said, the year in prison seemed to go by faster than the six weeks he spent filming The Ultimate Fighter.

"It's a time warp. Time isn't the same in jail. The days kind of drag, but the weeks fly by," he said.

Now that he's free, War Machine plans to return to fighting in the fall, hopefully no later than October, he said. While he still hasn't decided which organization he'll fight for, he said he certainly has suitors, adding that the U.K.-based BAMMA, which has signed other UFC castoffs like Paul Daley and Nate Marquardt, was courting him "even when I was in jail."

But rather than sign a long-term deal with one of the smaller leagues, his hope now is to get a few wins, serve out his three-year probation, and then get back in the big time.

Hopefully in the next two or three years when I'm off probation, and people see that I've changed my behavior, maybe the UFC or Bellator will give me another chance."