With Nick Diaz in UFC, Tyron Woodley, Tarec Saffiedine Likely Next in Line for Strikeforce 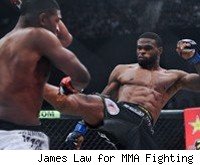 HOFFMAN ESTATES, ILL. – With Nick Diaz off to the UFC to challenge for Georges St-Pierre's welterweight title, Scott Coker is in a position he's familiar with.

The Strikeforce CEO, along with Zuffa brass, must come up with a plan to fill Diaz's welterweight title, which he vacated to slide over for an October title fight with his UFC counterpart. Last year, Coker was in a similar situation when Jake Shields vacated his middleweight belt to sign with the UFC. (And he has another vacancy on his hands with heavyweight champ Alistair Overeem released from the promotion last week.)

But after convincing wins by Tyron Woodley and Tarec Saffiedine on Saturday's Strikeforce: Fedor vs. Henderson main card in suburban Chicago, Coker believes they have vaulted to the top of the list for the Strikeforce welterweight belt – setting up a likely rematch between the two fighters.

"That's something that we're going to go back to the office and have a conversation internally," Coker said at Saturday's post-fight press conference at the Sears Centre Arena. "But I would think that Tyron and Tarec are going to be the frontrunners for that vacant title when it does happen."

In the opening bout on the Showtime-televised main card, Saffiedine (11-3, 3-1 Strikeforce) dominated Scott Smith (17-9, 1 NC, 3-4 Strikeforce), employing a surprising game plan by keeping the fight on the feet throughout. Saffiedine attempted just one takedown of the heavy-handed veteran, but outstruck him 142-21, according to Fight Metric.

And after that, Woodley (9-0, 7-0 Strikeforce), an All-American wrestler at Missouri, remained unbeaten with a unanimous decision win over Paul Daley (27-11-2, 2-2 Strikeforce), who lost a title fight to Diaz in April. Though Daley, whose defensive wrestling has been taken advantage of in the past, managed to stuff 12 of Woodley's 14 takedown attempts, Woodley was the more active striker in the first and second rounds.

Though Coker remained cautiously noncommittal that Woodley and Saffiedine will for sure fight for the vacant welterweight title, Woodley believes there should be no question he should be there."

"At this point, I definitely wouldn't be satisfied with anything else (but a title shot)," Woodley said. "I didn't ask for the fight with Paul Daley because I knew he was a cakewalk. I knew he was a tough guy with heavy hands. I knew stylistically, it would be a great fight. I definitely thought this fight would put me in the position to be in a world title (fight), and I still have that same idea – and I don't think there's anybody else in the weight class that deserves it. I feel like I'm the No. 1 (fighter) at the weight, and I think I should be fighting for the world title."