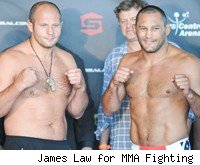 HOFFMAN ESTATES, ILL. – On paper, Strikeforce CEO Scott Coker knew he had history sitting right in front of him. And after Strikeforce: Fedor vs. Henderson on Saturday night, his suspicions were confirmed.

Leading up to the superfight between legends Fedor Emelianenko and Dan Henderson, Coker said he couldn't say without question the fight was the best Strikeforce had ever put together until after the final bell at Sears Centre Arena outside Chicago. After all, a dud of a main event without any fireworks would have just meant great potential, but a missed opportunity.

But after Henderson staged a remarkable comeback and essentially knocked out Fedor from his knees, Coker was finally prepared to say Fedor-Henderson goes to the front of the pack for best fight in the promotion's history.

"If you look at that fight, I think it stands right up there," Coker told MMA Fighting at the post-fight press conference. "If you look back at the history of Strikeforce, which is relatively a newer company, I think the ones that stand out in my mind are, in our early days, Frank Shamrock fighting Cung Le – that was an unbelievable matchup. And Nick Diaz fighting Paul Daley this year – unbelievable fight.

"And tonight, I think this one probably tops those two. So arguably one of the best fights in the history of our company."

Diaz and Daley fought in April for Diaz's welterweight title. After Daley lit his opponent up and had him on the ropes, Diaz mounted a comeback for the ages, getting a stoppage from strikes with just three seconds left in the first round. Le stopped Shamrock in March 2008, battering his right arm with kicks until it was broken, to win the middleweight title.

With such lofty expectations of Fedor (31-4, 1-3 Strikeforce) and Henderson (28-8, 3-1 Strikeforce) going into the fight, Coker knew there was a chance – albeit a small one – the fight might not live up to all it was being marketed as: a "clash of the titans" and "once in a lifetime" fight.

"It definitely lived up to the billing, so my hat's off to Fedor and Hendo," Coker said. "And my question is, is there anything Dan Henderson can't do? I want to know, because this guy is unbelievable."

After the fight, Fedor called referee Herb Dean's stoppage into question, saying he believed he could have continued. But Henderson said even if it came early, it was only a matter of seconds before it would have been stopped because he wasn't going anywhere from the top position he was using to rain down strikes. And Coker, too, said he agreed with the stoppage.

"It looked like when (Henderson) hit him with that uppercut, it flattened Fedor out," Coker said. "I felt that his legs did go, and he was hurt – he was injured. So therefore, I think the referee did the correct thing. He watched carefully to see what the response was, and at that time Dan was doing what Dan does. Thirty seconds earlier, it was Fedor doing that to Dan. But I think it was the correct stoppage."

Henderson, Strikeforce's light heavyweight champion, believes the win was perhaps the biggest of his career, a career that includes Pride wins over Wanderlei Silva and Vitor Belfort, memorable knockouts of Michael Bisping and Renato "Babalu" Sobral, and his light heavyweight title win over Rafael "Feijao" Cavalcante in March.

"I'd put it right up on top," Henderson said. "I admire Fedor as a fighter, and he's very dangerous. This means a lot more to me than some of the victories that I've had, personally. But I'm a huge fan of his, and I hope that he continues."

The fight was the last on the contracts for both Henderson and Fedor. And while there were instantly questions about a possible retirement looming for Fedor, who now has three straight losses after nearly 10 years without a defeat, Coker said he hopes both will be back in the promotion.

"As far as fighting in Strikeforce, I hope we have them both back," he said.