TJ Grant Drops to Lightweight, Meets Shane Roller at UFC on Versus 6 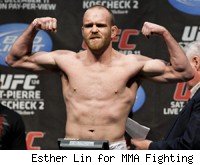 Canadian fighter TJ Grant will return to action after a nearly 10-month layoff, and he'll drop from welterweight to lightweight to take on Shane Roller.

The UFC announced the fight booking late Friday for its first visit to Washington, D.C., in October, saying both fighters have verbally agreed to the bout.

The Oct. 1 show will be UFC on Versus 6 and will be headlined by a bantamweight title fight between champion Dominick Cruz and top contender Demetrious Johnson.

Grant (16-5, 3-3 UFC) has not fought since a UFC 124 decision loss to Ricardo Almeida in December. His UFC career at welterweight has been up and down, with each of his three wins followed by a loss. All six of his UFC fights have been on pay-per-views, but have been on preliminary cards.

Grant was an instrumental part of last month's intriguing storyline at UFC on Versus 4 in Pittsburgh. Grant was scheduled to fight Charlie Brenneman, but several days before the fight he had to pull out with an illness, leaving Brenneman without a fight. But when Nate Marquardt was pulled from his main event with Rick Story by the Pennsylvania commission (and subsequently released by the UFC). Brenneman then was tapped to face Story and pulled off one of the year's biggest upsets – an upset that wouldn't have been possible without Grant's illness earlier in the week.

Roller (10-4, 1-1 UFC) had won two straight – and two fight night bonuses – and five of his last six before a vicious knockout loss to Melvin Guillard at UFC 132 earlier this month. The former All-American wrestler from Oklahoma State went 6-2 in the WEC prior to the merger with the UFC. His only two losses in that promotion came to eventual lightweight champions Ben Henderson and Anthony Pettis. His wins included submissions of former champion Jamie Varner and Anthony Njokuani. Only one of his 14 career fights has gone the distance.

UFC on Versus 6 will be the fourth and final show on the promotion's 2011 deal with the Versus cable station. The card will take place at the Verizon Center in the nation's capital. In addition to the 135-pound title fight between Cruz and Johnson, UFC on Versus 6 features a heavyweight tilt between Stefan Struve and Pat Barry, who both are coming off knockout losses; a welterweight fight between Brenneman and Anthony Johnson; and an anticipated rematch between Matt Wiman and Mac Danzig, 16 months after their controversial finish at UFC 115.