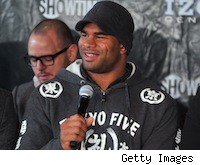 What exactly went wrong in the relationship between Strikeforce and Alistair Overeem? As of now, the only thing we know for sure is that that Overeem is cut from the organization. His trainer Martijn de Jong confirmed that to MMA Fighting late on Friday night, confirming an "Inside MMA" report of the blockbuster news.

Aside from that, details have been slow to emerge. Zuffa officials reached by MMA Fighting declined comment on the situation, and Overeem's team has said little.

But before the night was out, Overeem's team did drop one interesting nugget that further muddied the reasoning behind his dismissal. If the powers that be were upset about his refusal to fight on a September 10 show, Overeem provided evidence that his injuries were more severe than originally stated.

In a video posted at TheReem.com, Overeem is seen visiting Amstelland Hospital in The Netherlands, where his orthopedist, Dr. A.C.M. Pijnenburg, shows an X-ray that confirms that Overeem has a fractured rib and cartilage damage that preclude his immediate involvement in training.

"I'm very happy that I now have the confirmation for my story to cancel the fight, because canceling a fight is never nice," Overeem says on the video. "I'm the fighter who always wants to fight. The Strikeforce [Grand Prix] is something I really wanted to win. But also, I realize that I have to be fit to fight, of course. I felt I was not fit going into training, and now this to back up my story, feels good."

Overeem defeated Fabricio Werdum on June 18. Exactly one month later, he was officially removed from the Grand Prix, but at the time, Zuffa co-owner Dana White told MMA Fighting that Overeem was still a Strikeforce fighter.

The next day, White explained that it was a timing issue, and that he had no issues with Overeem's injury explanation.

"If you say you're hurt, you're hurt," he said then. "What are you gonna do? There's been a lot of that lately. If I got mad at guys who got hurt, I'd be really pissed off right now. It is what it is."

The plot twisted again a few days later, on July 27, when Glory World Series, an event run by Overeem's trainer de Jong, announced that Overeem would fight in their upcoming October show. The next day, MMA Fighting's Ariel Helwani asked Strikeforce CEO Scott Coker if Overeem would ever fight in Strikeforce again. Coker, though, stopped short of saying yes.

"That's going to be something where we'll sit down with [manager] Bas [Boon] and we'll have that conversation," he said.

Within 48 hours, Overeem was gone from Strikeforce. He had one fight left on his deal at the time of his release. The move marks the first time a standing champion has been punitively stripped of the belt by Zuffa since 2004, when BJ Penn signed a deal to fight for K-1 shortly after capturing the UFC welterweight title. That promptly led to a Penn lawsuit that was later settled. Whether Overeem follows that precedent and takes legal action remains to be seen, but his move to disseminate video proof of his injury moments after his release indicates there were at least doubters as to the veracity of his claims.

Overeem had the kind of larger-than-life presence that gave him the chance to be a star in the U.S. A win in the Strikeforce Grand Prix could have set up a match against the UFC champ. For both him and Zuffa, there was money to be made, and opportunities to be gained. For now, all of it is gone, and we don't know exactly why.