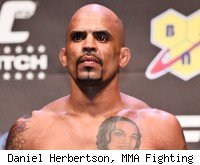 In the last edition of Fighter vs. Writer I edged out Joseph Benavidez with my UFC 132 picks, though he was one of the few people with the guts and the foresight to tab Tito Ortiz for an improbable victory, so the Joe-Jitsu master deserves some credit there.

But with Strikeforce/M-1 Global: Fedor vs. Henderson now just a few hours away, I turned to MMA's most prolific viral video star, Jorge Rivera, for a head-to-head battle of wits.

We all know what Rivera went through with his last-minute opponent change for UFC 133 next weekend, and sure, I have some injuries coming into this match-up that would have prompted a lot of other writers to pull out. But you know something? Nobody picks fights at 100 percent. Nobody. Time to suck it up and do the damn thing.

Rivera: Henderson via KO. "That's a tough fight to pick, but I'm leaning toward Hendo. I think his wrestling will nullify Fedor's judo and takedowns, and I think his right hand is a serious thing to be aware of. I don't know if I can see Fedor getting knocked out, but if someone can do it, Dan can. Though it wouldn't surprise me if the exact opposite happened, I still have to go with the American."
Fowlkes: Fedor via submission. If we're talking betting odds, the smart money is still on the underdog Henderson, but straight-up I have to give the edge to the bigger, younger Fedor. If he's focused and motivated -- and if he doesn't get cut early, which is always a threat for him -- I think he takes Hendo into the later rounds, wears him down, and taps him out.

Rivera: Tate via decision. "That's another tough one, but Miesha has good wrestling. I think it could go either way, but once again I have to side with the American."
Fowlkes: Tate via decision. If she's smart, she'll grind this one out and limit Coenen's chances off her back. That's easier said than done over five rounds, but if she didn't prepare to do exactly that then she deserves to lose.

Rivera: Kennedy via submission. "Both of these guys have outstanding wrestling, but I give the slight edge to Tim there and I think his jiu-jitsu is a little better than Robbie's. On the feet, I give the slight edge to Robbie for obvious reasons. Tim could have some problems if he can't get it down to the ground, but I've seen him against high-level wrestlers and he's very good at what he does. I think he'll get him down and probably submit him or maybe get a TKO on the ground."
Fowlkes: Kennedy via submission. Every second you stand toe-to-toe with Lawler is a disaster waiting to happen, but I think Kennedy is patient and technical enough to get this fight to the floor. I don't see it ending quickly, but Lawler's been known to get tired while Kennedy never has. Eventually the Army hero slaps on a choke and finishes it.

Rivera: Woodley via TKO. "I have nothing but respect for Paul Daley. I know him, think he's a good dude, unbelievable striker, arguably one of the best strikers in MMA, but I think Woodley is on the rise. He's the real deal. I think he's one of the better athletes in MMA right now, and he's got the whole game down. I think he's the wave of the future and he'll show that in the fight, and ground-and-pound his way to a TKO."
Fowlkes: Daley via TKO. I also have a ton of admiration for Woodley's skills, but he's still pretty inexperienced. In order to win this fight I think he'll have to stay on Daley for the full three rounds. He's certainly capable of that, but along the way there are going to be a few chances for Daley to stand up and throw that left hook of his. He only needs to land it once.

Rivera: Smith via KO. "I don't know enough about Tarec, but I know Scott Smith and he's got dynamite in both hands. If he can touch you, he can put you out. I apologize for not knowing enough about the other gentleman, but Scott Smith has showed he's got the heart to take some punishment and keep going, and as long as he's standing he's dangerous."
Fowlkes: Saffiedine via decision. Two things you don't question with Smith are his heart and his power -- that much is true. But we've seen in the past that he can be picked apart by quicker, sharper strikers, and that's exactly what Saffiedine is. All he has to do is avoid those muderballs that Smith throws and remember that it's never over until it's over with this guy.