Yves Edwards-Rafaello Oliveira on Tap for UFC on Versus 6 in Washington, D.C. 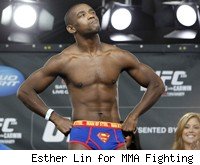 Yves Edwards will look to rebound from a Knockout of the Year-caliber loss to Sam Stout last month when he meets Rafaello Oliveira in October.

The two lightweights have agreed to meet at UFC on Versus 6 on Oct. 1 in the UFC's debut in the nation's capital. The promotion announced the matchup Thursday night.

UFC on Versus 6, the last of the promotion's four-card deal with the cable channel for 2011, will take place at the Verizon Center in Washington, D.C., and will be headlined by a bantamweight title fight between champion Dominick Cruz and Demetrious Johnson.

Edwards (40-17-1, 8-5 UFC) lost for the first time since his latest return to the UFC when a vicious left from Stout knocked him out cold in the first round of their UFC 131 bout. Stout won Knockout of the Night honors and snapped Edwards' three-fight winning streak, which included a double bonus for Fight of the Night and Submission of the Night in a win over Cody McKenzie at the UFC's Fight for the Troops 2 show in January.

Edwards is in his eighth stint with the UFC. His career with the promotion started at UFC 33 with a loss to future welterweight champ Matt Serra. In between returns to the Octagon, the Bahamas-born fighter has had bouts for a wide-ranging set of promotions, including Pride, Bodog Fight, EliteXC, Strikeforce and Bellator.

Oliveira (14-4, 1-3 UFC) is coming off a submission loss to fellow Brazilian Gleison Tibau at UFC 130 in May. That fight came on short notice, replacing an injured Bart Palaszewski, and was Oliveira's return to the UFC after going 4-0 outside the promotion after a 1-2 run in 2009-2010.

In addition to the bantamweight title fight between Cruz and Johnson, UFC on Versus 6 features a heavyweight tilt between the 6-foot-11 Stefan Struve and 5-11 Pat Barry, a welterweight bout between Charlie Brenneman and Anthony Johnson and the long-awaited rematch between Matt Wiman and Mac Danzig following their controversial finish at UFC 115 in June 2010. The main card will air live on Versus.