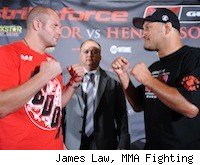 Fedor Emelianenko is the younger of the two fighters headlining Strikeforce's big event on Saturday night, but you might not know it from the buzz surrounding the athletes' respective careers. With two consecutive losses following a win streak for the ages, the whispers that Emelianenko is done as a top-level fighter have grown to audible declarations. So too has the speculation that he could be released with a third straight loss.

At 34 years old though, Emelianenko is a full six years younger than Henderson, who following the recent retirement of Randy Couture, is quickly becoming MMA's new ageless wonder. As the Strikeforce light-heavyweight champion, Henderson fights one weight class below Emelianenko, perhaps raising the stakes for Emelianenko in the process.

The thinking goes that if Emelianenko (31-3, 1 no contest) cannot beat a fighter whose natural weight is around 206 pounds, he has no business getting back in the cage with any monster heavyweights.

I tend to think that's unsound logic. After all, Forrest Griffin didn't retire after losing to middleweight champ Anderson Silva, and Matt Hughes didn't retire after BJ Penn moved up to welterweight and submitted him. When you're dealing with all-time greats, the game changes.

If Fedor does lose, he'll have lost to one of the greatest all-time fighters, which is no shame. And even though UFC president Dana White has repeatedly mentioned that it would be "losing to a middleweight," that's not exactly a fair statement. Henderson (27-8) has split his last eight fights between the 185-pound and 205-pound divisions. In one of those fights at light-heavyweight, he went five close rounds with Quinton "Rampage" Jackson, the same fighter White is promoting as the No. 1 contender in his 205-pound division right now.

As a two-division PRIDE champ and current Strikeforce light-heavyweight champ, Henderson's credentials are beyond reproach.

On to the fight, Emelianenko is considered around a 2 1/2-to-1 favorite. Their stand-up styles have become similar over time, with each man featuring a boxing-heavy approach that is light on kicks and heavy on power punching.

One criticism of Emelianenko has been that the status quo nature of his camp and training have not led to any evolution as a fighter. There is a case to be made that his February loss to Antonio Silva exhibited that. In that fight, against a taller, bigger man, Emelianenko threw only six kicks, missing out on a chance to better control the distance.

While the losses to Silva and to Fabricio Werdum show vulnerability, they do not highlight any particular weaknesses that Henderson can exploit. Silva's size (he weighs around 280 pounds at fight time) helped him keep Emelianenko down for the entirety of the second round of their fight, and Henderson (likely to weigh around 206-210) doesn't have the bulk to pull that off. Werdum is a jiu-jitsu wizard, while Hendo hasn't subbed anyone in the entire 21st century.

That leaves Hendo to play his power striking style and mix in takedowns. He is clearly capable of doing both, and doing both well, but Emelianenko's defense in both categories has historically been strong.

According to FightMetric, Emelianenko absorbs just .95 strikes per minute, a number that would rank him second all-time among UFC fighters had he fought in the promotion. Comparatively speaking, Henderson is hit 2.37 times per minute.

FightMetric stats also show that Emelianenko is taken down on just 22 percent of takedown tries, a number even better than Hendo's takedown defense (opponents successful 41 percent of the time). Emelianenko also gets the nod in strikes landed per minute (3.12 to 2.42) and striking accuracy (54 percent to 49 percent).

While Emelianenko gets the better of most of the statistical categories, they can all be negated by one well-placed punch. Henderson's shown the ability to knock out almost anyone, and while Emelianenko has never been truly finished by someone's striking prowess, it wouldn't be a total shock if Henderson was the man to change that.

All things considered though, Emelianenko is rightfully the favorite. He's the bigger fighter, has faster hands, and is appreciably better on the ground. He is expected to come in about 10 pounds lighter than usual, making him as hard to hit as ever. When Henderson is on his game, he's sprinkling takedowns in with his offense, the way he did against Rafael Cavalcante when he won the title. At other times, he gets knockout happy with his big right hand.

He'll need a performance like the one against "Feijao" to beat Emelianenko. An uneven performance won't get it done. Chasing around speed is rarely a winning proposition.

In 2007, UFC hosted Wanderlei Silva against Chuck Liddell. It was a fight that many wanted for years, and though it came a bit later than some would have hoped, both fighters turned back the clock to produce a great fight and tremendous moment. This is the type of fight I envision between Emelianenko and Henderson; three rounds, two legends and one memorable night. Years from now, hopefully the winner and loser won't matter so much. This is a fight mostly about and for history. But if we have to pick, Emelianenko's speed and defense win out over Hendo's offensive onslaught. Emelianenko via decision.