Aoki vs. McCullough, Kitaoka vs. Freire Booked for DREAM.17 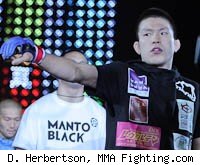 DREAM.17, which is set to take place on Sept. 24, 2011 at the Saitama Super Arena in Saitama, Japan, will be the first numbered event of the year for DREAM and will take place almost exactly one year after DREAM.16, which was held on Sept. 25, 2010 in Nagoya. The event is also expected to feature the opening round of DREAM's Bantamweight World GP which will feature the likes of Hideo Tokoro, Masakazu Imanari, Kenji Osawa, Bibiano Fernandes and four other foreign fighters.
DREAM lightweight champion Shinya Aoki is currently riding a five fight win streak, most recently putting on a dominating performance against Rich Clementi.

"Razor" Rob McCullough, a former WEC lightweight champion and World Muay Thai champion, comes in his DREAM debut following a knockout loss to Patricky Freire in the opening round of the 2011 Bellator Lightweight GP. Freire issued a public challenge to Aoki earlier this week.

Satoru Kitaoka shot to mainstream prominence on the heels of his impressive 2008 Sengoku Lightweight GP win. A swift submission victory over Takanori Gomi earned him the promotion's lightweight strap but back to back losses to Mizuto Hirota and Jorge Masvidal decreased Kitaoka's stock. Since then, Kitaoka has put together three solid victories on the regional circuit and will be making his promotional debut against Freire.

Willamy "Chiquerim" Freire, a former Shooto welterweight (154 lbs) champion, will come into the bout with Kitaoka off a Jan. 2011 decision loss to Waylon Lowe at UFC: Fight for the Troops 2. The loss was Freire's only fight in the UFC. Freire was expected to face Shinya Aoki and Tatsuya Kawajiri at the previous two DREAM events but visa issues and a hand injury forced him out of those bouts respectively.

Also announced prior to the DREAM press conference, Ryo Chonan and Eiji Mitsuoka will be staging a charity event titled "Stand Up Japan" in Sendai August 27. Chonan will face on New Japan Kickboxing champ Toshio Matsumoto in a kickboxing match while Mitsuoka will participate in a grappling match.