Eight Ways of Looking at Strikeforce/M-1 Global: Fedor vs. Henderson 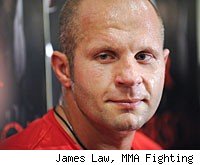 With Strikeforce/M-1 Global: Fedor vs. Henderson just a little over 24 hours away, we look at the biggest questions, concerns, and storylines for the biggest MMA event to hit Showtime in months.

I. There is almost nothing at stake in the main event, and just this once, that's okay. The Fedor Emelianenko-Dan Henderson bout is a little like a dumb summer action movie, and I mean that in the best way possible. Dumb summer action movies are fun, worthwhile distractions -- as long as they know what they are. There's nothing worse than a special effects vehicle that thinks it's Citizen Kane, and the same is true in MMA. This is a fight for the sake of fighting. It's the kind of match-up you'd make in the exhibition mode of a video game, just to see what happens when a 40-year-old natural middleweight takes on a once-great heavyweight. Again, that's all perfectly fine as long as a) Strikeforce and Showtime present it as such, without trying to pretend that it's more important than it is, and b) it doesn't become a habit. To their credit, the promotional powers that be have handled this one exactly right so far, but whether the success of this fight (and/or the lack of more meaningful available match-ups going forward) might prompt more just-for-the-hell-of-it bouts in the future remains to be seen. There's a place for movies whose main appeal is a chance to turn your brain off in the air-conditioning for 90 minutes, but it's not a year-round thing for a reason.

II. Okay, so it's not completely meaningless. Fedor could lose. He could drop his third straight fight, and to a guy who's not even in his division. At that point, it would be impossible to ignore the fact that his sudden career decline coincided almost exactly with his stay in Strikeforce, where the heavyweight division had been freshly restocked. Since coming to the U.S. following his Pride glory days, Fedor has beaten three opponents, all of whom were exposed as not quite primetime material (or maybe just past primetime) soon thereafter. Sylvia, Arlovski, Rogers -- what would it mean to beat any of those guys today? If he tops that run off with a loss to Henderson, then fades into retirement immediately after, the Fedor haters will use it as a cudgel to beat up on his entire career and legacy. That would be unfair and ungenerous, of course, but it doesn't mean it won't happen.

III. Dan Henderson, on the other hand, has nothing to lose. Well, almost nothing. As long as Fedor is standing in front of you, zinging those looping right hands at the more delicate parts of your face, there's always a reason to try your best. But come on, look at Hendo. Is there really anything more you could do to him to harm his looks at this point? He's got a face like a spoon that went through the garbage disposal. The best part is, he doesn't seem to mind. That makes this pretty much a no-lose for him. If he gets beat, so what, he fought one of the best heavyweights to ever do it -- and he's still the Strikeforce light heavyweight champ. If he wins, it's a pretty decent scalp to add to his collection. Plus, there's always the money, and Hendo is pocketing plenty of it in Strikeforce.

IV. What's to become of you, Robbie Lawler? When you get a chance to watch fights live and up close, you really get a sense for who hits hard and who just hits. Personally, I can't think of anyone I'd least like to have swatting at my head than Lawler. But as much fun as it is to watch a slugger ply his trade, lately his limitations have become especially obvious. He's lost three of his last five, and the two he won were against an over-the-hill Matt Lindland and a overly aggressive Melvin Manhoef. Chances are he'll lose to Tim Kennedy on Saturday, and then what? Another fight with Scott Smith? I'm not saying I wouldn't watch it, but I am saying I might not feel that good about it.

V. Remember when Miesha Tate won the one-night tournament to claim the right to challenge for the women's 135-pound title? Yeah, that was almost a year ago. It was cool and all, don't get me wrong. But in the time since Tate became the nominal number one contender, the belt has changed hands once and been successfully defended once. Some of that is poor planning and some is bad luck, but a lot of the heat behind Tate's title challenge has faded since then, which is a damn shame. Let's hope the fight itself isn't past its expiration date already.

VI. Tyron Woodley might be the single best argument for the existence of the Strikeforce: Challengers series. I know I've taken some shots at the Challengers shows in the past (it's like regular Strikeforce, only with a quarter of the production budget!), but Woodley's ascent matches the espoused Challengers vision perfectly. He cut his teeth on those lesser-known Friday night shows, headlined a couple and made his name against tougher and tougher opponents, and now he's ready to take the next step. In Daley, he faces an opponent who was fighting for the Strikeforce title just a few months ago, so it's clear that the grooming period is over for the former Missouri wrestler, and just in time. Now people know him and they're eager to see if he's ready for the big time. That's exactly how Challengers supposed to work, so good for them. Now if they could only make it look like it wasn't produced by a talented high school AV class, they'd be in business.

VII. Keep an eye on Scott Smith's chin. For a fighter like Smith, who depends on taking ten to land one, the ability to take a punch is a vital asset. That also makes it a feature he's used quite a bit in recent years, and like the brakes on a car, overuse might make it the first thing to go. Getting knocked out cold by Paul Daley isn't a sign that his chin is weakening, but if he can't stand up to the punishment of Tarec Saffiedine, who doesn't hit nearly as hard, it might be time to worry. The good news is, he seems aware of that. The bad news is, aware or not, Smith doesn't seem like the type who can change up his style to compensate for it.

VIII. Fedor is all out of vague retirement statement mulligans. You lose a fight in which your eye ends up looking like something out of a radioactive garden? Fine, you have a right to get mopey and talk about hanging it up, only to change your mind a few months later. But you only get to do that once. If Fedor loses this one, he better take a minute to think before stepping up to the mic. Nobody wants to be the legend who cried retirement.