Strikeforce: Fedor vs. Henderson -- By the Odds 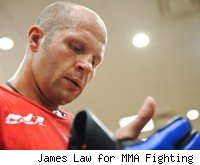 I'm not sure what's more of a challenge when it comes to picking a winner in Saturday night's cross-divisional, just-for-the-heck-of-it fight between MMA veterans Dan Henderson and Fedor Emelianenko: the fact that we don't know what Fedor has left in the tank, or the fact that we know exactly what Hendo has, even if it may not be enough.

To unravel these and other mysteries presented by Strikeforce: Fedor vs. Henderson, we turn to the betting odds to find out how online bookmakers see it. They're the ones who have to know what they're talking about just to stay in business, after all.

Of course, they're also the ones who have pegged Fedor as a considerable favorite in his last two fights, and we all remember how that worked out. Below, let's see if they've learned anything from those expensive lessons.

I've always suspected that internet bookies were hardcore Pride fanboys, and here's the proof. Okay, so I'm exaggerating a bit, but it is surprising to see Fedor, at this stage in his career, as this big of a favorite. Between Henderson's wrestling, his right hand, and his ability to take a punch, he has plenty of ways to win this fight. The biggest threat for him may be fatigue in the later rounds, which tends to take his submission defense down a few notches. Those are all variables you can work with in making a pick, but for Fedor the big question is whether he truly still wants to do this. The man shows about as much emotion as a bowling ball, so trying to discern something about his mental state from his pre-fight demeanor is pointless. The world of MMA has always loved Fedor more than Fedor loves it. What's hard to figure is, does he still love it enough to do what he has to in training and on fight night against a savvy vet like Hendo?
My pick: Henderson. At these odds, I simply can't pick Fedor, who's lost his aura of invincibility and maybe some of his passion for the sport. In a straight-up pick, sure, but as long as Hendo is a nearly 2-1 dog, he's worth the risk.

On paper, Tate has the exact style that Coenen struggles against. She's a strong wrestler with a good top game, and now that Strikeforce allows elbows on the ground she's even more dangerous. On the flip side, she hasn't fought in nearly a year, and that's not going to help her when it comes to closing the experience gap between herself and Coenen. Lately, the champion has made up for her deficiencies in the wrestling department with her outstanding submissions game. She can get roughed up for twenty minutes straight and still pull out a win off her back, which is probably the next best asset you can have to combat a wrestler -- right after a solid takedown defense. Still, it's a troubling way to win, since you're constantly struggling against the clock. All it takes is a careful, patient opponent to shut it down and nab that belt.
My pick: Tate. I think she takes Coenen down and makes this an ugly little war of attrition up against the fence. It won't be thrilling to watch, but as long as Tate sticks to what she does well, she should be able to pull it out.

The one thing we know about Lawler is that he walks into every fight with a lottery ticket in his back pocket. The trouble is, sometimes he gets so caught up thinking about his numbers coming up that he forgets about pocketing a regular paycheck. Everybody knows about his one-punch KO power at this point, so it's not like he's going to surprise Kennedy with that. What he needs to be concerned with is getting the fight into a position where he can use it, which is going to be the hard part. Kennedy is much better on the ground than Lawler is, and he's smart enough to use that. Lawler may be able to get back to his feet after some of the early takedowns, but eventually he'll wear himself out that way and then he'll be easy prey for a patient, cerebral fighter like Kennedy. As financial strategies go, the lotto is almost always inferior to the 401K.
My pick: Kennedy. I'll save it for the parlay at these odds.

Here's another case where oddsmakers have got the right guy, but perhaps to the wrong degree. Woodley should beat Daley, simply based on his greatest strength (wrestling) matching up so well against Daley's most glaring weakness (aside from self-control). But let's not get carried away here. Woodley is an 8-0 fighter who's faced a series of Challengers-level opponents in his Strikeforce run. Daley is a veteran of nearly 40 pro fights who has managed to remain a threat despite only minimal gains in his ground game over the years, and that's no accident. Tagging an inexperienced fighter like Woodley as a near 3-1 favorite in a fight like this is asking for trouble. He probably needs to grind out a decision to win this, and the whole time he's in the cage he's never more than one left hook away from getting beat. That's one thing if you're a fighter who's been there before, but it's quite another when you're still fairly green in the sport.
My pick: Daley. The odds are just too tempting, and Woodley is still too untested. Tread lightly, but take the risk here.

To complete the trifecta of heavy-hitters taking on technically superior fighters, Smith returns for the first time since his devastating knockout loss to Daley to see if he's still got enough steel left in those hands for another addition to the old highlight reel. In a point-fighting match, Saffiedine would beat him every time. Smith's style is just too dependent on landing one big shot, and let's just say he's not getting faster as the years and the beatings pile up on him. Saffidiene can be out-wrestled, but we all know Smith is going to go in there looking to bang. That's probably going to result in him getting picked apart by a quicker, sharper striker, and Smith is probably at least somewhat okay with that. He'll keep looking for that one opening all night long, and he'll attempt to pay for it with his own blood. Will that investment pay off the way it did against Cung Le (the first time) and Benji Radach? If this were a movie, sure. In real life, probably not.
My pick: Saffiedine. It's another one for the parlay, but I fear Smith's days of one-punch comebacks may be drawing to a close.

The 'For Entertainment Purposes Only' Parlay: Tate + Kennedy + Saffiedine