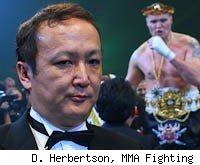 K-1, the largest and most prestigious kickboxing promotion in the world, is no longer owned by Fighting and Entertainment Group and has been sold to Japanese real estate firm Barbizon Co,. Ltd.

Promotional group FEG and president Sadaharu Tanikawa have operated K-1 since September 2003 but the promotion has fallen upon hard times recently due to the rapid decline in the the sport's popularity in Japan and the questionable entertainment-centric direction that Tanikawa has steered K-1.

The sale comes as no surprise as Tanikawa admitted back in January that FEG would "die" due to major financial issues. The sale to Barbizon does come as a surprise to many though as it was heavily rumored that a prominent Dutch promotional and management company was set to take the reins of K-1.

Full details from this historic deal after the break.

Barbizon does not own K-1 Koshien, K-1 MAX or DREAM.

K-1 MAX (standing for Middleweight Artistic eXtreme) includes the 70 kg and 63 kg weight divisions. It is unclear as to who owns the MAX trademark. MAX has been tied to broadcaster TBS (Tokyo Broadcasting System) in the past but FEG recently promoted a 63 kg MAX Japan tournament without TBS and have also announced plans for a 70 kg MAX tournament, again most likely without TBS.

DREAM, FEG's MMA promotion, remains under the control of FEG and Real Entertainment.

It is not yet clear what role current K-1 staff will play in the running of future operations. Given the astounding level of public criticism that FEG President Sadaharu Tanikawa has received recently, it seems unlikely that he will be involved with the running of K-1 going forward. K-1 creator Kazuyoshi Ishii is likely to be part of the new K-1 however as he has been hinting at this transfer for some time.

Ishii recently revealed that the new K-1 will hold a Heavyweight World GP every two years rather than the annual tournament that has been running since 1993. There will also be more of a focus on making this new K-1 appeal to a global audience. Until now, Japan has hosted every K-1 World GP Final.

Barbizon Co,.Ltd was formed in 1967, currently employs 35 employees and has 484,000,000 Japanese yen (approximately 6.2 million dollars) in capital. The company specializes in real estate and owns a number of hotels and apartment complexes in Southeast Asia and Japan.

It appears that the takeover actually took place approximately one month ago however the deal was not made public until Thursday afternoon. A press conference to announce details of the takeover has not yet been scheduled, and FEG officials have not yet commented on the sale.

K-1 was formed in 1992 by karate practitioner and Seidokan Karate creator Kazuyoshi Ishii. Since 1993, the promotion has staged the sport's most prestigious annual kickboxing tournament, the K-1 World GP.

In December 2002, Ishii was arrested for tax evasion and so he passed the promotion over to former pro wrestling journalist Sadaharu Tanikawa. FEG was formed in September of 2003 in an attempt to distance the K-1 brand from the shamed Ishii. Tanikawa took a more pro wrestling and entertainment-based approach to the promotion. The Japanese fight sport industry went through a boom in popularity peaking on Dec. 31, 2003, but Tanikawa's new angle has not been proven popular with fans or fighters as K-1 has been on the decline ever since.

A seemingly endless list of fighters and managers have spoken out against FEG and Tanikawa in recent times due to unpaid fight purses and the objections to the direction that Tanikawa has chosen to take K-1.