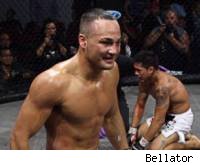 Eddie Alvarez finally has a date for his next title defense.

The reigning Bellator lightweight champion as well as arguably the top-rated fighter not under the Zuffa umbrella, Alvarez will take on season four tournament winner Michael Chandler on October 15 at Boardwalk Hall in Atlantic City, New Jersey.

Alvarez last fought at Bellator 39 in April, defeating Pat Curran by unanimous decision. The victory marked his seventh consecutive victory overall, and 12 of his last 13 for Alvarez. He is now 22-2 overall.

Alvarez should feel a nice home-field advantage, as Atlantic City is only about a one-hour drive from his hometown of Philadelphia.

Waiting for him there will be the 25-year-old Chandler, who trains out of Xtreme Couture and is a former collegiate wrestling All-American at the University of Missouri.

Chandler burst upon the MMA scene in impressive style, going undefeated in his first eight professional bouts thus far. In advancing to a championship match with Alvarez, he earned a submission win over Marcin Held and decisions over Lloyd Woodard and Patricky "Pitbull" Freire.