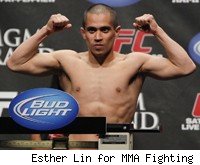 British fighter Vaughan Lee is the latest addition to the UFC's bantamweight roster, and he'll be welcomed to the promotion by Chris Cariaso at UFC 138 in November.

The UFC made Lee's signing official on Wednesday, and on Thursday announced the fight with Cariaso. The fight is expected to be part of the preliminary card for the show in Birmingham, England.

Fight bookings for UFC 138 have come fast and furious since the event was announced 10 days ago, including a headliner between middleweight contenders Chris Leben and Mark Munoz.

Lee (11-6-1) has not lost in more than two years, going 4-0-1 since his last setback. A first-round TKO of Marlon Jones at a Sprawl 'N Brawl event in Birmingham earlier this month appears to be the feather in his cap that put him into the UFC. His last four wins before that were by submission, and 10 of his 11 career wins have come by stoppage.

UFC 138 will be a hometown fight for the 28-year-old Lee, who does his MMA work at the Ultimate Training Centre facility in Birmingham. His MMA career has been a streaky one – three straight losses to open his career were followed by a six-fight winning streak, which was snapped by a TKO loss in August 2007 to current fellow UFC bantamweight Brad Pickett.

Cariaso (11-3, 1-1 UFC) will be looking to get back in the win column after a close split decision loss to Michael McDonald at UFC 130 in May. Cariaso was expected to face Norifumi Yamamoto at that event, but an injury forced "Kid" off the card a month before the fight. After going 1-1 in the WEC in 2010 before the merger, Cariaso won his UFC debut at the Fight for the Troops 2 show in January with a unanimous decision over Will Campuzano.

UFC 138 will be the promotion's first visit to the U.K. in 2011. Its last stop in England was at last October's UFC 120 in London, and this card ensures the UFC will have made at least one visit to England each year since 2007.

Aside from headliners Leben and Munoz, announced fights include a welterweight bout between former title challenger Thiago Alves and newcomer Papy Abedi; a lightweight fight between England's Paul Taylor and Anthony Njokuani; and a bantamweight bout between Pickett and Renan Barao. Of the nine fights that have been confirmed by the UFC, seven feature British fighters.

UFC 138 is expected to take place Nov. 5 at the LG Arena in Birmingham and will air on Spike TV on a tape-delayed basis.