After Loss to Daley, Scott Smith Looking to Avoid Another Knockout 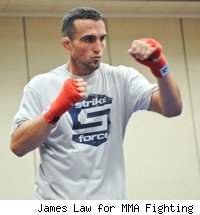 "If it happens again, consecutive times, I would be concerned," Smith said Thursday, two days before he returns to the cage for a fight with Tarec Saffiedine. "It's the first time I've been knocked out like that, sparring or anything. I had a TKO loss (against James Irvin in 2004) when I was fighting at heavyweight, but I wasn't out completely like I was against Daley. If it's something that happens again, I get concussions like that, I definitely need to step back and look at what I'm doing."

Concussions and brain injuries are a major issue in other sports, especially football, and Smith says concussions are an issue that need to be addressed in MMA, too. Smith says, however, that the issue goes beyond dramatic one-punch knockouts like he suffered at the hands of Daley: He thinks fighters are at risk in sparring, and they need to be smart about how they train.

"It's a concern," Smith said. "When I first started fighting MMA, my only training was putting the gloves and swinging with boxers. I've learned to start training a lot smarter and not take that kind of abuse."

In fact, Smith says protecting himself against training injuries is more important than avoiding shots like the one he took from Daley, which he views as more of a once-in-a-lifetime occurrence.

"I'm not going to take anything away from Daley, but I just got caught," Smith says of his loss in his last fight. "I can take a shot, I've taken some heavy blows, even in sparring. I think it was just kind of a -- not a lucky punch, but it landed in just the right spot."

The Saffiedine fight is a must-win situation for Smith: After going 0-2 in 2010, he doesn't want his first fight of 2011 to put him on a three-fight losing streak, which could result in him getting cut from Strikeforce. But Smith sounds extremely confident that he's going to put his losing streak behind him.

"He's tough, well rounded all the way around," Smith said of Saffiedine. "But I feel that I can put the fight where I want it. If I want it on the feet I'll keep it there, but if I'm getting it taken to me in the fight I can put it on the ground."

Smith was a popular fan favorite in the UFC in 2006 and 2007, going just 1-3 inside the Octagon but rarely having a dull moment. Now that UFC parent company Zuffa has purchased Strikeforce, it would be easy for Smith to view Strikeforce as a stepping stone back to the UFC. But Smith says he loves Strikeforce as a place for fights that are just a lot of fun, and he hopes it stays that way.

"I don't see the UFC completely taking them over," Smith said. "I think UFC and Strikeforce have two different goals. I think Strikeforce puts on better cards because they put on fights like Fedor vs. Henderson. That doesn't make sense as a title fight but it's a fun fight. It's a fan friendly fight. That's what Strikeforce is good at. They go out there and put on the fights the fans want to see. If Zuffa's smart they keep Strikeforce doing that, whereas the UFC will build up guys to see who's the best fighter in the world."

Smith has had a lot of those fun, fan-friendly fights in his career, including two of the best comeback wins in MMA history, his wins over Pete Sell in 2006 and Cung Le in 2009. He describes those battles as two of his best MMA memories.

Now Smith is hoping for a career comeback on Saturday night.