Tim Kennedy Adjusting to Life on the Zuffa Roster, Hoping for a Brighter Future 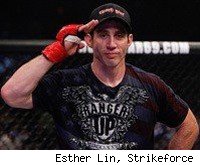 Tim Kennedy is the kind of guy who tends to deal in absolutes. To the Army Ranger and pro fighter, there's right and there's wrong and there's no mistaking the two. For instance, take his stance on testosterone replacement therapy, which some fighters stand behind, at least in cases of legitimate medical need.

Technically, according to the athletic commissions, it's a practice that's fair and legal as long as you can produce the right doctors' notes and hit the right hormone levels at the right time. But just because you can get away with something like that, Kennedy said, it doesn't mean you should.

"I know I could walk into my doctor and say the exact same thing that everyone else says and get prescription testosterone. Then, when I know my test is coming up, I can reduce my testosterone levels. It's an advantage, and it's an unfair advantage."

Kennedy is just as passionate about calling out guys he sees breaking the rules in other areas, such as fellow middleweight Michael Bisping, who benefited from an illegal knee against Jorge Rivera in their February meeting.

"It's not really Bisping specifically, it's just guys that cheat," Kennedy said. "It's not some holier-than-thou thing, like I'm some boy scout who always does the right thing -- I don't. But my sport -- mixed martial arts -- is based on honor, integrity. Every time guys cheat -- whether it's in the fight or with performance-enhancing drugs -- it really disappoints me and embarrasses me. Unfortunately, I think it encourages people, because with a situation like Bisping, not only did he cheat in the fight and then spit in [Rivera's] corner, then he was rewarded by becoming an Ultimate Fighter coach. That sends the wrong message."

Of course, you could argue that now might not be the best time to criticize the way Zuffa manages its roster. Ever since purchasing Strikeforce this past spring, the UFC's parent company is the biggest player by far in the MMA world, and when Kennedy takes on Robbie Lawler at Saturday night's Strikeforce: Henderson vs. Fedor event, he'll be working for Zuffa for the first time in his 16-fight career.

But holding his tongue just to please the brass isn't exactly Kennedy's style, which is why he can't help himself when the conversation turns to how Zuffa's stance on sponsors has affected his own personal finances after clothing company Ranger Up was put on the no-go list for this fight.

"It is a big, huge hit, financially," said Kennedy, who added that he "might" be able to sport a National Guard sponsor logo, but otherwise has "zero sponsors."

"Last time, I made about as much in sponsors as I did for my purse. This time I have none of that. ... It's a pretty gigantic problem. Half of my income was pretty much just [sponsors]. It'd be like, whatever your salary is at AOL, they said, 'We're just going to pay you half of that now.' That said, I'm excited about the potential benefits of [Zuffa's] marketing prowess and ability to get your name out there. Also, some of the match-ups are really intriguing. But I haven't seen any of those benefits yet."

You'd think, at least on paper, that Kennedy would be one of the fighters to benefit most from the change in ownership. Zuffa has the ability to get his compelling story of service and sacrifice out to the masses, and it also has the talent pool to provide him with a wider array of potential opponents -- at least, eventually.

For now though, Kennedy will have to content himself with what Strikeforce has to offer, which is why he said he called out Lawler to begin with.

"I knew they weren't going to give me a title shot in my first fight after [defeating] Melvin, so I wanted the next best guy. I think that Robbie is without a doubt the next best guy in Strikeforce, besides [middleweight champion Ronaldo] "Jacare" [Souza] himself. I didn't want to fight up-and-comers. I wanted to fight big name guys, and that's Robbie."

The question is, if he gets past Lawler, then what? At that point he'll have fought almost all the top middleweights on the Strikeforce roster, and the only options left may be rematches (such as another crack at Souza) or a move to the UFC. One requires retreading the same ground all over again, while the other requires some contract maneuvering that may or may not be immediately plausible.

For the 31-year-old Kennedy, it's a question he can't wait forever to get an answer to. The future still seems to hold more promise than the past for his fighting career, but that will only get you so far. Especially when your trunks are devoid of sponsors and you're running out of new guys to fight, promises won't pay your bills.