Rich Franklin's Life Story to Be Turned Into Feature Film 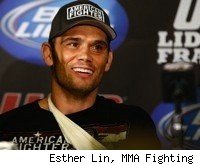 The rights to Rich Franklin's life story have been optioned by a Hollywood production company for a feature film about the former UFC champion's life.

The film, tentatively titled "American Fighter," already has a screenwriter attached, with David Hollander, writer of TV shows The Guardian and The Cleaner, to pen the script. The story is also said to chronicle the rise of mixed martial arts.

Double E Pictures, which previously produced the comedy Hamlet 2, and has several other films in various stages of production, will produce the film along with Motion Theory.

"Rich's story has that rare combination of qualities that make for a great sports film; human drama, great obstacle and seemingly insurmountable odds," Hollander said in a press release about the project. "The fact that all of this is set against the formation of an exploding and dangerous sport and that Rich basically defined what a UFC champion could be make it uniquely interesting to write."

Franklin is just the latest among MMA fighters to have his life story optioned for the big screen. Matt Hamill recently saw a biopic on his life entitled "Hamill" perform well on the film festival circuit, while current UFC featherweight champion Jose Aldo also had the rights to his life story bought for a film. In addition, a documentary on middleweight champion and longtime Franklin rival Anderson Silva entitled "Like Water" recently had its world premiere at the renowned Tribeca Film Festival, while another doc about former middleweight champ Evan Tanner, "Once I was a Champion," also made recent film festival rounds.

Franklin himself has acted in a few movies, including "Cyborg Soldier" and "Hamill," but it is unknown if he will play himself in the film.

Meanwhile, Franklin awaits a return to the cage after his scheduled UFC 133 bout against Antonio Rogerio Nogueira was canceled due to a Nogueira injury.