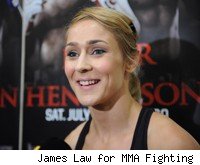 When Zuffa, parent company of the UFC, bought Strikeforce earlier this year, fans could practically hear the collective thud of hearts dropping into the stomachs of female fighters and fans of women's MMA.

After all, UFC and Zuffa president Dana White has been repeatedly adamant that he doesn't believe female MMA will ever realistically have a place in the UFC – largely because of his belief the talent pool of upper-echelon women's fighters is not deep enough to sufficiently fill out multiple divisions over a sustained period of time.

With Strikeforce under the Zuffa umbrella, the fear that the most well-known home for women's MMA could disappear into the ether with a possible future merger with the UFC is a real one. But it's one that women's 135-pound champion Marloes Coenen and her Saturday challenger, Miesha Tate, have no problem tackling head on.

"What I see is that Zuffa isn't a non-profit organization – they have to make money," Coenen said after a short workout Wednesday. "But that's the reason they keep (the women) here in the Zuffa family. A lot of guys are watching MMA, but if we can draw in the women, as well, and women say, 'Hey, they're normal girls and they kick (butt), and I can do that, too,' I think we can double the audience. If we can do that, we make more money – and they'll keep us around."


Coenen (19-4, 3-1 Strikeforce), who defends her title for the second time after beating Sarah Kaufman for the belt last October, believes her fight with Tate being the co-main event on a Showtime-televised card – in the Zuffa era, no less – is a good sign.

"They did put us in the co-main event – they could've put us in the Challengers show or on a non-televised card, but they chose not to do that," Coenen said. "By making that decision, that gives me a lot of confidence. Now that we've been given the chance, we have to prove that we deserve to be here."

Tate ( 11-2, 4-1 Strikeforce) comes in riding a five-fight winning streak, though this will be her first fight in nearly a year. The Team Alpha Male-trained fighter hasn't been shy about challenging White to give her sport a fighting chance – and she said taking advantage of the opportunity is crucial on Saturday.

"It's not exactly pressure, but I feel really motivated," Tate said. "I feel like this is our opportunity, and I want to make the most of it. I feel like there's going to be a lot of people paying attention to this, and Dana and Lorenzo (Fertitta) and all the guys at the UFC – Zuffa might start giving women a little bit of recognition, maybe start actually taking notice of it and becoming more informed on what it's about. Marloes and I are the two top ranked, so we really can say a lot about the caliber of talented women out there – and that's what I'm hoping for. I hope we really raise the bar."

Women's MMA had its first "face" of the sport in Gina Carano. Cristiane "Cyborg" Santos beat her two years ago for the 145-pound Strikeforce belt. Carano, set to star in the major movie "Haywire" this fall, has been out of action since that loss, and Cyborg, too, has been out for over a year.

The door appears to be wide open for Coenen or Tate to seize the title as the next face of women's MMA.

"I think Gina did a hell of a job – she really made (women's MMA) grow here," Coenen said. "I will always be thankful to her and respect her a lot. And Cyborg, if you don't respect her, you're crazy. If I can be (the new face of the sport), I'll do my best and I will honor the game and all the women in it, too."

Coenen and Tate fight in the co-main event of Strikeforce: Fedor vs. Henderson on Saturday at the Sears Centre Arena in Hoffman Estates, a northwest suburb of Chicago. The main event features a heavyweight non-title superfight between light heavyweight champion Dan Henderson and Fedor Emelianenko. The main card airs live on Showtime at 10 p.m. Eastern.