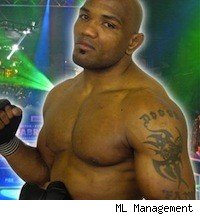 Just four fights into his professional career, two-time freestyle wrestling Olympian Yoel Romero has signed with Strikeforce, and will debut during the promotion's upcoming September 10 event in Cincinnati. His first task will not be an easy one, as he will face former light-heavyweight champion Rafael "Feijao" Cavalcante.

His ML Management team confirmed the details to MMA Fighting in a press release.

"I'm excited about this opportunity," Romero said in the release. "I've wanted to prove my skills in MMA for a long time and to get the opportunity to that with a person of Feijao's caliber is exciting."

Romero competed in the 2000 and 2004 Summer Olympics representing his native country of Cuba. In 2000, as a 23-year-old, he captured a silver medal in freestlyle in the light-heavyweight division. In 2004, he finished fourth.

He began his pro fighting career in December 2009, and has reeled off four straight stoppage victories, all via TKO. He ramped up his progression in 2011, fighting twice so far. At 34 years old, he's a big talent without a lot of time, and he'll have to progress quickly, which explains why he's being thrown in with a fighter far more experienced than he is.

In addition to his sterling wrestling credentials, Romero has reportedly been working his hands with his brother Yoan Pablo Hernandez, a 24-1 pro boxer who is the current interim WBA cruiserweight champion.

Cavalcante represents a major upgrade in competition for him. Cavalcante (10-3) captured the Strikeforce 205-pound belt in August 2010 with a third-round TKO of Muhammed "King Mo" Lawal. In his first defense, however, he had the tables turned, suffering a third-round TKO at the hands of Dan Henderson. This will be his first match since then.